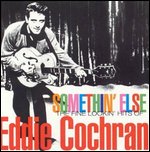 Eddie Cochran (October 3, 1938 – April 17, 1960), was an American rock and roll pioneer who in his brief career had a small but lasting influence on rock music through his guitar playing. Cochran's rockabilly songs, such as "C'mon Everybody", "Somethin' Else", and "Summertime Blues", captured teenage frustration and desire in the late 1950s and early 1960s.[1] In the words of Lester Bangs, writing in Rolling Stone in 1972, "Eddie may have imitated Elvis vocally even more than a dozen or so other stalwarts of the day such as Conway Twitty, but his influence on pop consciousness of the magnitude of The Beatles and The Who was deep and profound".[2] He experimented with multitracking and overdubbing even on his earliest singles,[3] and was also able to play piano, bass and drums.[1] His image as a sharply dressed, rugged but good looking young man with a rebellious attitude epitomized the stance of the Fifties rocker, and in death he achieved iconic status.[4]

Cochran was born in Minnesota and moved with his family to California in the early 1950s. He was involved with music from an early age, playing in the school band and teaching himself to play blues guitar.[5] In 1955, he formed a duet with the unrelated guitarist Hank Cochran, and when they split the following year, Cochran began a song-writing career with Jerry Capehart. His first success came when he performed the song "Twenty Flight Rock" in the movie The Girl Can't Help It, starring Jayne Mansfield. Soon after, Liberty Records signed him to a recording contract.

Cochran was 21 when he died in April 1960 in a road accident during his British tour. Though his best known songs were released during his lifetime, more of his songs were released posthumously. In 1987, Cochran was inducted into the Rock and Roll Hall of Fame. His songs have been much covered by bands such as The Who, The Beach Boys, The Beatles, Dick Dale & his Del-Tones, Blue Cheer, Led Zeppelin, Rush, Humble Pie, Commander Cody and His Lost Planet Airmen, Joan Jett and the Blackhearts, Teenage Head, Tiger Army, UFO, The White Stripes, Stray Cats, Tommy and the Guns, and the Sex Pistols.

Cochran was born in Albert Lea, Minnesota, as Ray Edward Cochran.[6] His parents were from Oklahoma and he always stated in interviews that he was from Oklahoma. He took music lessons in school but quit the band to play drums. Also, rather than taking piano lessons, he began learning guitar, playing the country music he heard on the radio. In 1955, Cochran's family moved to Bell Gardens, California. As his guitar playing improved, he formed a band with two friends from his junior high school. During a show featuring many performers at an American Legion hall, he met Hank Cochran (later a country music songwriter). Although they were not related, they recorded as The Cochran Brothers and began performing together.[7] Eddie Cochran also worked as a session musician and began writing songs, making a "demo" with Jerry Capehart, his future manager.

In 1956, Boris Petroff asked Cochran if he would appear in the musical comedy film The Girl Can't Help It. He agreed and sang a song called "Twenty Flight Rock" in the movie. In 1957, Cochran starred in his second film, Untamed Youth, and also had his first hit, "Sittin' in the Balcony", one of the few songs he recorded that were written by other songwriters (in this case John D. Loudermilk). "Twenty Flight Rock" was written by AMI staff writer Ned Fairchild. AMI granted Cochran a co-writer credit but no royalties, a common arrangement by which publishers move songs from demos to commercial recordings. This allowed Cochran to rewrite or add to the song to turn it into a rock and roll song. Fairchild, who was not a rock and roll performer, merely provided the initial form of the song which Cochran later turned into a rock and roll song. His co-writing credit reflects his changes and contributions to the final product.

In November 1957 Liberty Records released Cochran's only album released during his lifetime, Singin' To My Baby. There were only a few rockers on this album, and Liberty seemed to want to move Cochran more into the pop music direction. However, his most famous hit, "Summertime Blues" (co-written with Jerry Capehart), was an important influence on music in the late 1950s, both lyrically and musically. The song, released on Liberty recording #55144, charted at #8 on August 25, 1958. Cochran's brief career included only a few more hits, such as "C'mon Everybody", "Somethin' Else", "My Way", "Weekend", "Teenage Heaven", "Sitting in the Balcony", "Three Stars", "Nervous Breakdown", and his posthumous UK number one hit "Three Steps to Heaven". In 1959, he backed Skeets McDonald at Columbia's studios for "You Oughta See Grandma Rock" and "Heart Breaking Mama".

In early 1959, two of Cochran's friends, Buddy Holly and Ritchie Valens, along with the Big Bopper, were killed in a plane crash while on tour. Eddie's friends and family later said that he was badly shaken by their deaths, and he developed a morbid premonition that he would also die young. He was anxious to give up life on the road and spend his time in the studio making music, thereby reducing the chance of suffering a similar fatal accident while touring. However, financial responsibilities required that he continue to perform live, and that led to his acceptance of an offer to tour the United Kingdom in 1960.

On Saturday, April 16, 1960, at about 11.50 p.m., while on tour in the United Kingdom, 21-year-old Cochran died in a traffic accident in a taxi (a Ford Consul, not, as widely quoted, a London Hackney carriage) travelling through Chippenham, Wiltshire, on the A4. The speeding taxi blew a tire, lost control, and crashed into a lamp post on Rowden Hill, where a plaque now marks the spot (no other car was involved).[8] Cochran, who was seated in the centre of the back seat, threw himself over his girlfriend to shield her and was thrown out of the car when the door flew open. He was taken to St. Martin's Hospital, Bath, where he died at 4.10 p.m. the following day of severe head injuries.[9] Cochran's body was flown home and he was buried on April 25, 1960, at Forest Lawn Memorial Park in Cypress, California.[10]

Songwriter Sharon Sheeley and singer Gene Vincent survived the crash, Vincent sustaining lasting injuries to an already permanently damaged leg that would shorten his career and affect him for the rest of his life. The taxi driver, George Martin, was convicted of dangerous driving, fined £50, disqualified from driving for 15 years, and sentenced to prison for six months (although by some accounts he served no prison time at all).[11] His driving privileges were reinstated by the court in 1969. The car and other items from the crash were impounded at the local police station until a coroner's inquest could be held. A police cadet at the station, who would become Dave Dee of the band Dave Dee, Dozy, Beaky, Mick & Tich, taught himself to play guitar on Cochran's impounded Gretsch.[12] Earlier in the tour, the same guitar had been carried to the car for Cochran by a young fan later to become Marc Bolan of T.Rex.[13] A posthumous album, My Way, was released in 1964.

Cochran was a prolific performer, and the British label Rockstar Records has released more of his music posthumously than had been released during his life. The company is still looking for unpublished songs.

One of his posthumous releases was "Three Stars", a tribute to J.P. Richardson, better known as The Big Bopper, and Eddie's friends Buddy Holly and Ritchie Valens, who had all died together in a plane crash just one year earlier. It was originally written and recorded by Tommy Dee just hours after the deaths were officially reported, and Cochran recorded his version the day after. His voice broke during the lyrics about Valens and Holly.

In 1987, Cochran was inducted into the Rock and Roll Hall of Fame.[15] His pioneering contribution to the genre of rockabilly has also been recognized by the Rockabilly Hall of Fame. Several of his songs have been rereleased since his death, such as "C'mon Everybody", which was a number 14 hit in 1988 in the UK. Rolling Stone ranked him number 84 on their list of the 100 greatest guitarists of all time in 2003.

Cochran's life is chronicled in several publications, including Dont Forget Me The Eddie Cochran Story, written by Julie Mundy and Darrel Higham (ISBN 0-8230-7931-7), and Three Steps To Heaven, written by Bobby Cochran (ISBN 0-634-03252-6).

On 2 June 2008, The Very Best of Eddie Cochran was released by EMI Records.

One of the first rock and roll artists to write his own songs and overdub tracks, Cochran is credited also with being one of the first to use an unwound third string in order to "bend" notes up a whole tone – an innovation (imparted to UK guitarist Joe Brown, who secured much session work as a result) which has since become an essential part of the standard rock guitar vocabulary. Artists such as The Rolling Stones, Bruce Springsteen, Van Halen, Tom Petty, Rod Stewart, Motörhead, Humble Pie, Commander Cody and His Lost Planet Airmen, Lemmy Kilmister, The Head Cat, The Damned, UFO (band), T. Rex, Stray Cats, Brian Setzer, Cliff Richard, The Who, The Beach Boys, The Beatles, Blue Cheer, Led Zeppelin, The White Stripes, The Sex Pistols, Rush, Buck Owens, Tiger Army, Dion, Simple Minds, Guitar Wolf, Paul McCartney, Alan Jackson, Keith Richards & The X-Pensive Winos, and Jimi Hendrix have covered his songs.

It was because Paul McCartney knew the chords and words to "Twenty Flight Rock" that he became a member of The Beatles. John Lennon was so impressed that he invited Paul to play with his band The Quarrymen. Jimi Hendrix performed "Summertime Blues" early in his career, and Pete Townshend of The Who was heavily influenced by Cochran's guitar style ("Summertime Blues" was a Who live staple at one time and is featured on their Live At Leeds album). Glam rock artist Marc Bolan had his main Les Paul model refinished in a transparent orange to resemble the Gretsch 6120 guitar played by Cochran, who was his music hero.[16] He was also a heavy influence on the nascent rockabilly guitar legend Brian Setzer from Stray Cats, who plays a 6120 almost like Cochran, whom he portrayed in the film La Bamba. Cochran is easily one of the first musicians, alongside Chuck Berry, whom the late Rory Gallagher was always quick to mention as a strong influence on his musical taste and performance.

In 1988, "C'mon Everybody" was used by Levi Strauss & Co. in an advertisement to promote its 501 Jeans catalogue and rereleased as a promotional single, hitting #14 in the UK charts. The advertisement told a story of how the narrator, Sharon Sheeley, attracted Cochran by wearing her 501s.

When playing with Hank Cochran, Eddie Cochran played a Gibson L-4C archtop acoustic guitar with a florentine cutaway and a DeArmond 'Rhythm Chief' pickup, which can be clearly seen in the Cochran Brothers publicity photograph.

Chart positions are from the Billboard Hot 100.

This article uses material from the article Eddie Cochran from the free encyclopedia Wikipedia and it is licensed under the GNU Free Documentation License.