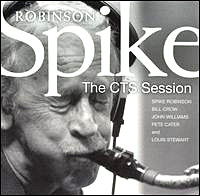 Henry Berthold "Spike" Robinson (January 16, 1930 in – October 29, 2001) was a jazz tenor saxophonist. He began playing at age twelve, recording on several labels, including Discovery, Hep and Concord. However, he sought an engineering degree and followed that profession for nearly 30 years. In 1981 he returned to recording music.

Beginning on alto saxophone in his early teenage years, Robinson soon discovered that it was hard to make a living playing the kind of music he wanted to play. In 1948 he joined the US Navy as a musician and by 1950 was based in the UK.

He was soon regularly jamming at London's Club Eleven, Downbeat Club and Studio 51 with leading UK beboppers, including Tommy Pollard, Johnny Dankworth and Victor Feldman. He made a few records for Carlo Krahmer's Esquire label but eventually was transferred home and demobilized. Unhappy with the music scene in the Chicago area, he took advantage of the GI Bill to study electronic engineering at university.

For most of the next 30 years he lived and worked in Colorado, eventually taking up music again, this time playing tenor saxophone and working nights at local clubs. A constant musical companion of these times was Dave Grusin. In 1981 Robinson recorded for the first time since his London sessions, which also featured pianist Vic Feldman and bassist Ray Brown. Encouraged to visit the UK by a British fan, in 1984 Robinson began a series of tours which were so successful that he took early retirement from his engineering job to turn to a full-time career in music, appearing with established British jazz musicians such as fellow tenor Dick Morrissey, pianist Bill Le Sage, bassist Alec Dankworth and drummer Bill Eyden, among others.

Throughout the rest of the 1980s and into the early 1990s, he played at clubs and festivals throughout the UK, Europe and in various parts of the USA, making his New York debut at Christmas 1990. A succession of superb record albums, most as leader but some with artists such as Louis Stewart, Harry Edison, Al Cohn, Roy Williams and Claude Tissendier, attracted high critical and public praise.

Despite his bebop beginnings, the mature musician who emerged in the 1980s from self-imposed exile is a consummate ballad player who eagerly explores the endless archives of the Great American Songbook. His rhapsodic, breathy style is instantly identifiable and the effortless loping swing of everything he plays helped to make Robinson into one of the outstanding tenor saxophonists of his generation. In the early 1990s Robinson was touring extensively from a UK base, recording many albums and headlining at clubs and festivals in Europe and the USA.

Henry Berthold "Spike" Robinson, saxophone player and engineer has died, aged 71. Robinson's playing was characterised by a mellow tone, unaggressive approach and a deep affinity with the classic American song. Broadly speaking, he was one of that school of tenor saxophonists who followed in the wake of Lester Young, players such as Stan Getz and Zoot Sims, but he had developed his own highly engaging voice within that style.

(Quote from the Daily Telegraph obituary of Friday, 2 November 2001)

This article uses material from the article Spike Robinson from the free encyclopedia Wikipedia and it is licensed under the GNU Free Documentation License.

Johan Halvorsen Sarabande aus der Suite ancienne für Orchester
Update Required To play the media you will need to either update your browser to a recent version or update your Flash plugin.