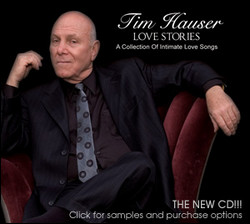 Tim Hauser (born December 12, 1941) is a singer and founder-member of the vocal group The Manhattan Transfer.[1]

He was born in Troy, New York. Hauser, his sister Fayette, and their parents moved to the Jersey Shore when he was seven years old. He lived in Ocean Township, New Jersey and Asbury Park, New Jersey, and attended St. Rose High School in Belmar, New Jersey where an award in his name has been given every year since 1989 to students who excel in Theater Arts.[2]

He began to sing professionally at age 15 while living in Asbury Park, when he founded a doo wop vocal quintet called The Criterions.[3] They recorded two singles for the Cecilia Label; "I Remain Truly Yours", and "Don't Say Goodbye". The Criterions appeared on Alan Freed's Big Beat Show. He developed his producing skills at an early age.

In 1959, he entered Villanova University. His college years were a continuation of the musical involvement he had started to develop, with Hauser spending much of his college time energetically expanding his musical interests. Hauser, along with fellow Criterions members Tommy West and Jim Ruf performed as the Troubadours Three, singing folk music. He also was a member of the Villanova Singers and the Villanova Spires/Coventry Lads, along with classmate Jim Croce. Hauser spent all four years on the staff of college radio station WWVU. In 1963, he graduated from Villanova with a BS in Economics.

In 1964, Hauser served in the United States Air Force and the New Jersey Air National Guard. In 1965, he began his career in marketing. From 1965-66, Hauser worked as a market research analyst with the advertising agency, Sullivan, Stauffer, Colwell, and Bayles. His accounts included Pepsodent Toothpaste (Lever Bros.), Micrin Mouthwash (Johnson & Johnson), and Rise Shaving Cream (Carter Products). From 1966-1968, he worked as Manager of the Market Research Department for the Special Products Division of the Nabisco. His accounts included all ready to eat cereals, hot cereals, and pet food products.

In 1969, he formed the first version of The Manhattan Transfer with Gene Pistilli, Marty Nelson, Erin Dickins and Pat Rosalia. The group had a country/R&B sound. Together they recorded one album, Jukin', on the Capitol label. However, they differed in ideas on direction so the group dissolved in the early 70s.

Hauser took odd jobs to support himself while still pursuing his musical career, including driving a taxicab. Through this he met a waitress and aspiring singer, Laurel Massé. Hauser was again driving his cab when he picked up the conga player for the group Laurel Canyon, who invited him to a party, where he met Janis Siegel. Together with Laurel, they decided to reform The Manhattan Transfer. They needed a male singer, so they contacted Alan Paul. The four became The Manhattan Transfer on October 1, 1972. After a car accident, Massé decided to leave the group and pursue a solo career, and in 1978 Cheryl Bentyne was hired to replace her. Since then the award-winning line-up is unchanged.

The Manhattan Transfer have won 10 Grammy Awards, and many Gold and Platinum records. They took home both the Downbeat and Playboy readers polls every year in the 1980s for best vocal group. In 2007, they won the JazzTimes Readers Poll for best vocal group. When Ahmet Ertegun founded the Rock and Roll Hall of Fame, he selected Hauser to serve on the original voting committee, a position he held for three years (198688). In 1993, he was awarded an Honorary Doctor's Degree in Music from The Berklee College of Music.

This article uses material from the article Tim Hauser from the free encyclopedia Wikipedia and it is licensed under the GNU Free Documentation License.