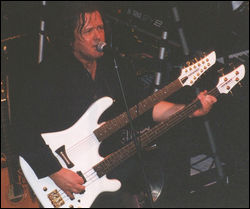 John Kenneth Wetton (12 June 1949 – 31 January 2017) was an English singer, bassist, and songwriter.[1] He was born in Willington, Derbyshire, and grew up in Bournemouth, Dorset. He rose to fame with bands Mogul Thrash, Family, King Crimson, Roxy Music/Bryan Ferry, Uriah Heep, and Wishbone Ash.[1]

After his period with King Crimson, Wetton formed U.K., and later he was the frontman and co-principal songwriter of the supergroup Asia,[1] which proved to be his biggest commercial success. Their eponymous debut album sold eight million copies worldwide and was Billboard magazine's No. 1 album of 1982. He later formed the duo Icon with Geoff Downes (also from Asia, ex-Yes, ex-The Buggles), and from the 1990s had a successful solo career, releasing several studio and live albums.

Wetton grew up in Bournemouth and was in a number of early bands with Richard Palmer-James, on bass and vocals, including The Corvettes, The Palmer-James Group (formed with Alec James), Tetrad, and Ginger Man.[2] A key early band was Mogul Thrash; after live work with Renaissance, he joined Family and also did various sessions.[1]

Wetton's first big break came when he joined Robert Fripp (also a native of Dorset) in his new line-up of King Crimson in 1972 (replacing Boz Burrell), allowing Wetton to come to the fore as a lead singer and composer. Palmer-James also worked with the band as a lyricist. Wetton remained with the band until Fripp unexpectedly disbanded it in 1974.[3] Wetton continued to work on various projects, including a tour with Roxy Music[4] and two albums with Uriah Heep.[5] In 1977, after failed attempts to reunite King Crimson and create a new band with Rick Wakeman,[6] Wetton formed U.K. with Bill Bruford, who had also been in King Crimson with him. Wetton brought into U.K. keyboard/violin wizard Eddie Jobson,[1] while Bruford brought in guitarist Allan Holdsworth. Upon Bruford and Holdsworth's departure, American percussionist Terry Bozzio joined, making U.K. a threesome a la Emerson, Lake & Palmer. This version of U.K. released the studio album Danger Money (1979) and toured in support of Jethro Tull.

Wetton released his first solo album, Caught in the Crossfire, in 1980 after the break-up of U.K. Later that same year, he had a brief stint in Wishbone Ash, contributing bass and vocals to their album Number the Brave (1981). In 1981, at the urging of Geffen Records' John Kalodner, Wetton started working and writing with Steve Howe, who had most recently been in Yes. They went on to form Asia[1] with whom Wetton worked until 1983. In that year, Wetton was fired from Asia at the insistence of Geffen Records, ostensibly because of less-than-expected sales of the Alpha (1983) album. Wetton was brought back to Asia in 1985, with Mandy Meyer replacing Steve Howe, to complete Astra (1985).[7]

In the late 1980s, Wetton's collaboration with former Roxy Music guitarist Phil Manzanera was released as Wetton/Manzanera (1986), with drums provided by Yes's Alan White. Also around this time, Wetton began working again with Geoff Downes and Carl Palmer in an attempt to restart Asia without Steve Howe. Some of the material by this incarnation of Asia made its way onto 1990's Then & Now CD.

The 1990s saw Wetton mostly out of Asia and focusing on a solo career. In 1999, another attempt to reform Asia resulted in Wetton participating in the short-lived progressive rock group Qango with Carl Palmer, John Young, and Dave Kilminster. The group performed several shows in the U.K. and recorded one live album, Live in the Hood, before disbanding when Wetton and Palmer returned to their solo projects.

In 2013 he guested on the album Grandine il vento with Renaissance, with whom he had played live 42 years before. That same year, he toured with American Idol finalist Leslie Hunt's Chicago-based band District 97 to commemorate the 40th anniversary of the King Crimson album Larks' Tongues In Aspic.

Wetton also worked extensively as a session musician with such musicians as Brian Eno, Bryan Ferry and Phil Manzanera.

Wetton died in his sleep at the Macmillan Unit at Christchurch Hospital in Christchurch , Dorset, on 31 January 2017, from complications of colorectal cancer. He was survived by his wife Lisa, son Dylan, brother Robert and mother Margaret (Peggy).[9][10][11]

Geoff Downes stated "It is with great sadness and a heavy heart, that I have to report we have lost my dearest friend, brother, bandmate and long term musical collaborator [...] He will be remembered as one of the world’s finest musical talents, and I for one of many was wholly blessed by his influence [...] Life will not be the same without him. And words are not really enough to describe the loss I feel right now".[12] Billy Sherwood, who was Wetton's producer, co-songwriter and co-performer on his solo album Raised in Captivity, replaced him in Asia. On June 17, 2017, Asia performed a special concert in Wetton's memory, titled An Extraordinary Life (full title: An Extraordinary Life - An Interactive Celebration of the Life & Music of John Wetton), in reference to the eponymous song from the Asia album Phoenix; Fan submitted performances were shown on a large video screen above the stage. This included a rendition of the Alpha track "Never in a Million Years", which was performed by the NJ based tribute band The Aurora Project. Some King Crimson songs were also performed at the event.[13]

Artists who have cited Wetton as an influence or have expressed their admiration for him include Billy Sheehan,[14] Juan Alderete of The Mars Volta and Racer X,[15] Michael Sweet of Stryper,[16] Ron Anderson,[17] and Joseph D. Rowland of Pallbearer.[18]

This article uses material from the article John Wetton from the free encyclopedia Wikipedia and it is licensed under the GNU Free Documentation License.