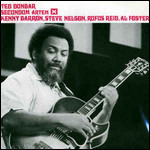 Earl Theodore 'Ted' Dunbar (January 17, 1937 in Port Arthur, Texas May 29, 1998) was a jazz guitarist, composer, and educator. He published four volumes on jazz. He trained as a pharmacist at Texas Southern University, but by the 1970s only did pharmacy work part-time. He was also a trained numerologist and had studied other aspects of mysticism. He became interested in jazz at age seven and in the 1950s he joined several groups while studying pharmacy at Texas Southern University. At one point he received accolades from Ebony (magazine) and Down Beat. In the 1950s he became influenced by Wes Montgomery. In 1966 he moved to New York City and gained more experience.[1] In 1972 he became one of the first jazz professors at Rutgers University and taught Kevin Eubanks, Vernon Reid and Peter Bernstein, as well as many others. He died in 1998 of a stroke.[2]

Ted Dunbar wrote a series of books on tonal convergence that are inspired and related to the Lydian chromatic concept. This center piece of this series is entitled: "A System of Tonal Convergence for Improvisors Composers and Arrangers".

This article uses material from the article Ted Dunbar from the free encyclopedia Wikipedia and it is licensed under the GNU Free Documentation License.

Franz Liszt Dulci Jubilo/Adeste/Weihnachtsbaum
Update Required To play the media you will need to either update your browser to a recent version or update your Flash plugin.