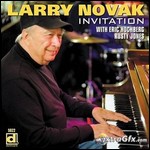 Lawrence R. "Larry" Novak (born May 18, 1933) is an American jazz pianist. He is the father of drummer Gary Novak.

Larry Novak was born in Chicago. He learned piano from age five and began playing jazz at 14. He studied at Loyola University Chicago and the University of Minnesota, followed by a stint playing in a military band in 1959-60. Novak led a trio ensemble at the London House in Chicago from 1961 to 1963 and then at Mr. Kelly's from 1963 to 1975, a gig he inherited from Marty Rubenstein. During this time, he released the album Larry Novak Plays! on Dot Records, issued in 1964. Novak played with and arranged for Peggy Lee and worked extensively with Pearl Bailey; he also worked with singers Mel Tormé, Frank Sinatra, Joe Williams, Sarah Vaughan, and Carmen McRae. Among the instrumentalists he played with are Dizzy Gillespie, Al Hirt, Charlie Shavers, Barney Kessel, Scott LaFaro, Sonny Stitt, Louie Bellson, Terry Gibbs, Buddy DeFranco, Phil Woods, and Scott Hamilton.

From 1984, Novak taught at DePaul University.

This article uses material from the article Larry Novak from the free encyclopedia Wikipedia and it is licensed under the GNU Free Documentation License.

Johann Christian Bach Sinfonie in B-Dur op. 9 Nr. 1
Update Required To play the media you will need to either update your browser to a recent version or update your Flash plugin.