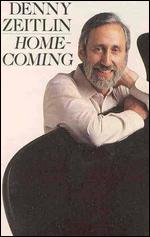 Denny Zeitlin (born 10 April 1938, Chicago, Illinois) is an American jazz pianist and composer, and a clinical professor of psychiatry at University of California, San Francisco. Since 1963, he has recorded more than 35 albums, including more than 100 original compositions, and was a first-place winner of the Down Beat International Jazz Critics Poll in 1965 and 1974. In 2014, JazzTimes contributor Andrew Gilbert wrote that "by any measure, Zeitlin's creative output over the past 50 years places him at jazz's creative zenith."[1]

Zeitlin grew up in the Chicago suburb of Highland Park. He began improvising on the piano at age two and was composing before elementary school. His father was a radiologist who played piano by ear. His mother was a speech pathologist and his first piano teacher. He began formal study in Western classical music at age six, switching to jazz in the eighth grade. In high school, he played professionally in and around Chicago,[2] and by college at the University of Illinois at Urbana-Champaign, was playing with Ira Sullivan, Johnny Griffin, Wes Montgomery, Joe Farrell, Wilbur Ware, and Bob Cranshaw, among others. Mentors included pianist Billy Taylor and George Russell, while pianist Bill Evans, an early supporter, frequently recorded Zeitlin's composition "Quiet Now" and made it the title track of a 1970 album.[1][3][4]

Signed by Columbia Records' John H. Hammond,[5] Zeitlin began his recording career in 1963 while studying medicine at Johns Hopkins University School of Medicine, debuting as the featured pianist on the Jeremy Steig album Flute Fever, which also featured Ben Riley and Ben Tucker. Four Denny Zeitlin Trio albums for Columbia followed in the period through 1967. Trio members included Charlie Haden and Jerry Granelli. Zeitlin moved to San Francisco in 1964 to intern at the University of California, San Francisco, followed by a psychiatric residency.[3][4]

Jazz critic Leonard Feather called Zeitlin "the most versatile young pianist to come to prominence in the early 1960s".[6] Reflecting on Zeitlin's Columbia period, jazz historian Ted Gioia wrote that the pianist "had assimilated the breakthroughs of the previous decade, from the impressionism of Bill Evans to the free-fall explorations of Ornette Coleman, and blended them into a personal style that anticipated the next fifteen years of keyboard advances. He stood out from the crowd for the unbridled creativity of his work, the richness of his harmonic palette, and the sheer beauty of his piano tone".[7]

Between 1968 and 1978, Zeitlin integrated electronic keyboards, synthesizers, and sound-altering devices with acoustic instruments, working in multiple musical genres. The results were first heard in 1969 when Zeitlin composed and performed music for the "Jazzy Spies" sequences on the first season of Sesame Street, featuring vocal overdubs by Grace Slick. The following year, he released Expansion, a trio album with George Marsh and Mel Graves, which Down Beat magazine awarded its highest rating.[8] The period culminated with Zeitlin's writing the score for the 1978 remake of Invasion of the Body Snatchers, which turned out to be his only film score despite numerous offers afterward, because of the extreme workload of many 20-plus-hour days. While New Yorker film critic Pauline Kael thought the music occasionally overpowered the action, she called the score "generally dazzling" and a large contributor to both the humor and terror of the film.[9]

Beginning in 1978, Zeitlin focused primarily on acoustic music, continuing to play concerts internationally[10] and recording some 22 albums. His projects included the solo album Soundings, the duo album Time Remembers One Time Once with Charlie Haden, and Denny Zeitlin Trio in Concert with bassist Buster Williams and drummer Matt Wilson. Zeitlin continued to draw strong reviews. Critic Doug Ramsey wrote that "Trio in Concert", released in 2009, "catches Dr. Zeitlin, at age 70, in his musical prime and his trio afire".[5] In 2013 at age 75, Zeitlin released Both/And, a solo electro-acoustic effort recorded in his home studio using using four electric keyboards and a Steinway piano.

Since 1968, Zeitlin has been on the teaching faculty at the University of California, San Francisco, where he is clinical professor of psychiatry. He has a private practice in San Francisco and Marin County. He had a 30-year mentorship with psychoanalyst Joseph Weiss, founder of Control-Mastery Theory. Zeitlin has combined his two disciplines in a lecture and workshop entitled "Unlocking the Creative Impulse: The Psychology of Improvisation".[4][11]

In comparing his two careers, Zeitlin has said it would be a mistake to think that psychiatry served merely to support his passion for music, when in fact he has a passion for both. "In each setting, communication is utterly paramount. There has to be a depth of empathy that allows you to really inhabit the other person's world. It comes out as a collaborative journey in both settings."[3]

Zeitlin lives in Marin County, California, is an avid mountain biker and wine aficionado, the latter interest shared with his trio. He is married to actress Josephine Zeitlin.[1]

As Co-Leader with David Friesen

As Co-Leader with David Grisman

As Co-Leader with Charlie Haden

This article uses material from the article Denny Zeitlin from the free encyclopedia Wikipedia and it is licensed under the GNU Free Documentation License.