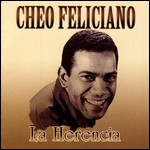 Feliciano (birth name: José Luis Feliciano Vega [note 1]) was born in Ponce, Puerto Rico, the second largest city in the island located in the southern part of Puerto Rico. There he was raised and educated. As a child, he was nicknamed "Cheo" by his family - a name which means José and is a term normally only used by close friends and family. However, the name stuck and became part of his everyday name (using the nickname avoids confusion with José Feliciano, another major Puerto Rican singer to whom he is not related). At a young age he was influenced by the bolero music of the Trio Los Panchos. When he was only eight years old he formed his first group with his friends and named it "El Combo Las Latas". They were so poor that their musical instruments were made out of cans. Feliciano attended the Free School of Music in Ponce after finishing his primary education where he studied and became a percussionist.[1][2][3]

In 1952, Feliciano moved with his family to New York City and settled down in Spanish Harlem. Here he auditioned as a percussionist in the "Ciro Rimac's Review" band - giving him his first professional musical job. Bandleader Tito Rodríguez, heard Feliciano play and offered him a job in his orchestra; this he accepted but after playing for some time with Tito, he left the band to play the conga for Luis Cruz. Despite leaving he always remained on friendly terms with Tito. Feliciano also played percussionist for Kako y su Trabuco orchestra. He was also a roadie for Mon Rivera.[1][2][3]

In 1955, Rodríguez found out that Joe Cuba was in need of a singer for his sextet. Aware that Feliciano was also a talented singer, he recommended Cuba that he try out for the position. Feliciano auditioned and became a vocalist for the Joe Cuba Sextet. He was the rare baritone among salsa singers, and his deep voice and quick wit as an improviser made him a favorite among the Latino public.[1][2][3]

On October 5, 1957, Feliciano made his professional singing debut with the song "Perfidia" (he was also married on that same day). He sang for the sextet for a total of 10 years. In 1967, he joined the Eddie Palmieri Orchestra and sang for them for two years. However, an increasing addiction to heroin threatened his life and career. He decided to cure himself "cold turkey" and eventually join Puerto Rico's rehabilitation center, Hogares CREA. Feliciano credits Tite Curet Alonso, the author of most of his hits and his best friend, with pushing him through his rehabilitation. As a result, he is a candid (and vehement) anti-drug spokesperson, who has volunteered to assist in the rehabilitation of fellow salsa artists who fall prey to drug addiction.[1][2][3]

In 1972, Feliciano came back to music and made album "Cheo", his first solo recording, which broke all sales records in the Latino music market. The album included:

During the 1970s, Feliciano recorded for the "Fania Record Co." and had "Hits" with "Amada Mia" (My Love) and "Juan Albañil". He also participated in the first salsa opera "Hommy".

In 1982, Feliciano formed his own recording company called "Coche Records" and in 1985 he became the first tropical singer to perform at the Amira de la Rosa Theater in Barranquilla, Colombia. In 1987, he landed the role of Roberto Clemente's father in the musical "Clemente".[1][2][3]

In 1990, Feliciano recorded the album of bolero music, titled "Los "Feelings" de Cheo". This was 17 years after his bolero recordings of La Voz Sensual and Looking for Love, both recorded in Buenos Aires, Argentina and orchestrated and arranged by Maestro Jorge Calandreli. He has traveled all over Europe, Japan, Africa, and South America. In Venezuela, he had a reunion with Eddie Palmieri. In 1995, Feliciano won a Platinum Record Award for "La Combinación Perfecta" (The Perfect Combination).[1][2][3]

In 2000, Feliciano recorded "Una Voz, Mil Recuerdos" (One Voice, A Thousand Memories) as a tribute to various Puerto Rican singers. The album was named among the 20 outstanding recordings of the year by the National Foundation of the Popular Culture of Puerto Rico. In 2002, he recorded "Cheo en la Intimidad". Currently Feliciano is working with Panamanian singer and actor Ruben Blades. This production will have them singing each others' music. A Release date has not been determined. Feliciano is still very active and continues to travel and perform all over the world.[1][2][3]

During the years, he enjoyed successes with the following "hits",:

Over the years, Cheo Feliciano has received the following recognitions:

Cheo Feliciano currently resides in Puerto Rico and continues to record boleros. He is also the anti-drugs spokesperson for the Government of Puerto Rico.

This article uses material from the article Cheo Feliciano from the free encyclopedia Wikipedia and it is licensed under the GNU Free Documentation License.