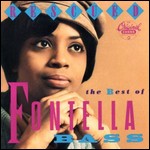 Fontella Bass was born in St. Louis, Missouri, the daughter of gospel singer Martha Bass (a member of the Clara Ward Singers).[2] She was the older sister of R&B singer David Peaston.[3] At an early age, Fontella showed great musical talent. At the age of five, she provided the piano accompaniment for her grandmother's singing at funeral services, she sang in her church's choir at six, and by the time she was nine, she had accompanied her mother on tours throughout the South and Southwest America.[2]

Bass continued touring with her mother until the age of sixteen. As a teenager, Bass was attracted by more secular music. She began singing R&B songs at local contests and fairs while attending Soldan High School from which she graduated in 1958.[4] At 17, she started her professional career working at the Showboat Club near Chain of Rocks, Missouri. In 1961, she auditioned on a dare for the Leon Claxton carnival show and was hired to play piano and sing in the chorus for two weeks, making $175 per week for the two weeks it was in town. She wanted to go on tour with Claxton but her mother refused and according to Bass "... she literally dragged me off the train". It was during this brief stint with Claxton that she was heard by vocalist Little Milton and his bandleader Oliver Sain who hired her to back Little Milton on piano for concerts and recording.[2]

Bass originally only played piano with the band, but one night Milton didn't show up on time so Sain asked her to sing and she was soon given her own featured vocal spot in the show. Milton and Sain eventually split up and Bass went with Sain; he also recruited male singer Bobby McClure and the group became known as "The Oliver Sain Soul Revue featuring Fontella and Bobby McClure".

With the support of Bob Lyons, the manager of St. Louis station KATZ, Bass recorded several songs released through Bobbin Records and produced by Ike Turner. She saw no notable success outside her home town. It was also during this period she met and subsequently married the noted jazz trumpeter Lester Bowie.[2]

Two years later she quit the Milton band and moved to Chicago after a dispute with Oliver Sain. She auditioned for Chess Records, who immediately signed her as a recording artist. Her first works with the label were several duets with Bobby McClure, who had also been signed to the label. Released early in 1965, their recording "Don't Mess Up a Good Thing" (credited to Oliver Sain) found immediate success, reaching the top five at R&B radio and peaking at #33 at pop. In 1979 the song was covered by Ry Cooder with Chaka Khan on Cooder's album Bop 'Til You Drop.

Bass and McClure followed their early success with "You'll Miss Me (When I'm Gone)" that summer, a song that had mild success, reaching the Top 30 on the R&B chart, although it made no significant impression on the pop chart. After a brief tour, Bass returned to the studio. The result was an original composition with an aggressive rhythm section; backing musicians on the track included drummer Maurice White (later the leader of Earth, Wind, & Fire), bassist Louis Satterfield and tenor saxophonist Gene Barge, with the young Minnie Riperton among the background singers. The song, "Rescue Me", shot up the charts in the fall and winter of 1965. After a month-long run at the top of the R&B charts, the song reached #4 on the US pop charts and #11 in the UK, and gave Chess its first million-selling single since Chuck Berry a decade earlier. It sold over one million copies, and was awarded a gold disc.[5]

Bass followed with "Recovery," which did moderately well, peaking at #13 (R&B) and #37 (pop) in early 1966. The same year brought two more R&B hits, "I Can't Rest" (backed with "I Surrender)" and "You'll Never Know." Her only album with Chess Records, The New Look, sold reasonably well, but Bass soon became disillusioned with Chess and decided to leave the label after only two years, in 1967. Bass claimed that, although the credited co-writers Carl Smith and Raynard Miner, and record producer Billy Davis, had assured her that her contribution to co-writing the lyrics of "Rescue Me" would be acknowledged, this was never done.[6]

I had the first million seller for Chess since Chuck Berry about 10 years before. Things were riding high for them, but when it came time to collect my first royalty check, I looked at it, saw how little it was, tore it up and threw it back across the desk.[2]

Bass demanded a better royalty rate and artistic control; she approached her then manager Billy Davis about securing her writing credit on the song but was told not to worry about it. When the record came out and her name was still not on it she was told it would be on the legal documents, but this never happened. She continued to agitate about the matter for a couple of years but later recalled: "It actually side-stepped me in the business because I got a reputation of being a trouble maker."[2]

Tiring of the mainstream music scene, she and husband Lester Bowie left America and moved to Paris in 1969, where she recorded two albums with the Art Ensemble of Chicago – Art Ensemble of Chicago with Fontella Bass and Les Stances a Sophie (both 1970). The latter was the soundtrack from the French movie of the same title. Bass's vocals, backed by the powerful, pulsating push of the band, have allowed the "Theme De YoYo" to remain an underground cult classic ever since. She also appeared on Bowie's The Great Pretender (1981) and All the Magic (1982).

Even with the success of "Rescue Me" it was many years and much litigation before Bass would be credited with her share of the songwriting and the royalties. In 1993 Bass sued American Express and Ogilvy & Mather for the unauthorized use of the song in a commercial for the credit card giant.[2]

The next few years found Bass at a number of labels, but saw no notable successes. After her second album, Free, flopped in 1972, Bass retired from music and concentrated on raising a family; she had four children with Bowie.[2] She returned occasionally, being featured as a background vocalist on several recordings, including those by Bowie. In 1990, she recorded a gospel album with her mother and brother David Peaston, called Promises: A Family Portrait of Faith and undertook a fall tour of the US West Coast, called "Juke Joints and Jubilee", which featured both traditional gospel and blues performers. During the 1990s, she hosted a short-lived Chicago radio talk show, and released several gospel records on independent labels. In 1992, through her old friend Hamiet Bluiett, she was invited to perform three tracks on the World Saxophone Quartet album Breath of Life.

Like many artists of her time, Bass experienced a revival of interest. She was featured on the PBS Special and accompanying DVD, Soul Celebration. Soul Spectacular recorded live at Heinz Hall in Pittsburgh, Pennsylvania, November 2001. Her voice can be heard on two tracks on the Cinematic Orchestra's 2002 album Every Day, and another two tracks on their 2007 album Ma Fleur.

In the 2000s, she toured Europe with her younger brother David Peaston until she fell ill. For her last years she had to struggle due to her deteriorating health. Bass survived breast cancer, a series of strokes beginning in 2005, and also had a leg amputated.[9] On December 26, 2012, she died at a St. Louis hospital from complications of a heart attack suffered earlier in the month; she was 72.[3][10][11]

This article uses material from the article Fontella Bass from the free encyclopedia Wikipedia and it is licensed under the GNU Free Documentation License.

Carl Philipp Emanuel Bach Allegro aus der Triosonate d-moll
Update Required To play the media you will need to either update your browser to a recent version or update your Flash plugin.