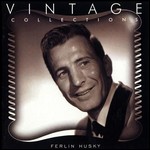 Ferlin Eugene Husky (December 3, 1925 March 17, 2011) was an early American country music singer who was equally adept at the genres of traditional honky honk, ballads, spoken recitations, and rockabilly pop tunes. He had two dozen Top 20 hits in the Billboard country charts between 1953 and 1975; his versatility and matinee-idol looks propelling a seven-decade entertainment career.[1]

In the 1950s and 60s, Husky's hits included "Gone" and "Wings of a Dove", each reaching No. 1 on the country charts. He also created a comic outspoken hayseed character, Simon Crum; and recorded under the stage name Terry Preston from 1948 to 1953.[1]

In 2010, Husky was inducted into the Country Music Hall of Fame.

Husky was born in Cantwell, a community of east Desloge, Missouri. His mother named him Furland, but his name was misspelled on his birth certificate. Husky grew up on a farm near Flat River and attended school in Irondale. He learned guitar from an uncle. After dropping out of high school, Husky moved to St. Louis, where he worked as a truck driver and steel mill worker while performing in honky tonks at night.[1]

During World War II, Husky served in the United States Merchant Marine for five years, entertaining troops on transport ships. His Crum character evolved from stories he told at the time about a Missouri neighbor named Simon Crump.[1] His website states that his ship participated in the D-Day invasion of Cherbourg.

After the war, Husky continued to develop the Crum character while working as a disc jockey in Missouri and then Bakersfield, California in the late 1940s. He began using the moniker Terry Preston at the suggestion of Smiley Burnette, who claimed Ferlin Husky would never work on a marquee.[1] As a honky tonk singer, Husky signed with Capitol Records in 1953 under the guidance of Cliffie Stone, also the manager for Tennessee Ernie Ford. With Capitol Records, he returned to using his given name. A few singles failed before "A Dear John Letter" with Jean Shepard became a No. 1 hit. The followup was called "Forgive Me John".

In 1955, Husky had a solo hit with "I Feel Better All Over (More Than Anywheres Else)"/"Little Tom". As Simon Crum, he signed a separate contract with Capitol Records and began releasing records, the biggest of which was 1959's "Country Music is Here to Stay" (No. 2 for three weeks).

In the late 1950s, Husky had a long string of hits, including the No. 1 "Gone" in 1957 (he first recorded "Gone" as Terry Preston in 1952, but the earlier version lacked the strings and backup singers of the newly-emerging Nashville sound). "Gone" was a crossover success, also reaching No. 4 on the pop music chart. It sold over one million copies, and was awarded a gold disc.[2] The song's popularity led to a stint as a summer replacement host in 1957 on CBS-TV's Arthur Godfrey's Talent Scouts.[1]

He then began an acting career, appearing on Kraft Television Theatre, and portraying himself in the 1957 film Mr. Rock & Roll (his website states he had bit parts in 18 films, including with Zsa Zsa Gabor and Mamie Van Doren). Bob Ferguson's "Wings of a Dove" became his biggest hit in 1960, topping the country charts for ten weeks and attaining No. 12 on the pop chart. Husky was also known for his ability to mimic other popular country singers, including Tennessee Ernie Ford and Kitty Wells.

Although he did not have more chart-toppers, he charted three dozen hits between 1961 and 1972, with the biggest being "Once" (1967) and "Just for You" (1968). In late 1972, after over 20 years with Capitol, Husky signed with ABC Records, where he scored several Top 40 hits into 1975, with the biggest being the Top 20 "Rosie Cries a Lot" (1973). Husky briefly retired in 1977 following heart surgery but resumed touring. He remained a popular concert draw, performing at the Grand Ole Opry and elsewhere. He was married four times and for the last six years of his life lived with his long-time love, Leona Williams (former wife of Merle Haggard).

Husky suffered from cardiopathy for many years and was hospitalized several times since the late 1970s, including for heart surgery in 2005 and blood clots in his legs in 2007. He was admitted to St. John's Hospital in Springfield, Missouri on April 19, 2009 with congestive heart failure and pneumonia. On July 15, 2009 his spokesman said he was recuperating at home after being released from a Nashville hospital. As recently as 2009, he lived in Vienna, Missouri.

On February 23, 2010, the Country Music Association announced his induction into the Country Music Hall of Fame. He was heralded for his vocal and comic prowess—and "all around showmanship"—that left a legacy as "one of the best entertainers country music has ever produced".

On January 16, 2011, Husky was honored at West St. Francois County High School in Leadwood, Missouri where local singers and the high school choir sang some of his hits. Husky also donated several items of memorabilia, including his Country Music Hall of Fame award, to the city of Leadwood. They will be permanently stored at the high school.

On March 8, 2011 Husky was hospitalized again after several days of not feeling well. By the weekend he had improved and was preparing to move out of the coronary care unit, but on March 17, Husky died at his daughter's home in Westmoreland, Tennessee of congestive heart failure.[3]

Husky was one of the first country singers to get a star on the Hollywood Walk of Fame (for recording) at 6675 Hollywood Blvd.

The street that runs through the city park in Leadwood, Missouri is named for him.[4]

This article uses material from the article Ferlin Husky from the free encyclopedia Wikipedia and it is licensed under the GNU Free Documentation License.