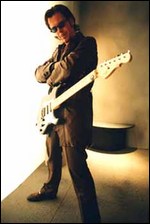 Pengilly moved to Sydney in 1966,[1] and became best friends with fellow band member Tim Farriss with whom he attended Forest High School.

Their first band Guinness, formed in 1971, was a high school band in which Pengilly was the principal songwriter and lead singer.[2] The band included American David Stewart on pedal-steel guitar and Malcolm Walker on drums, and was named after bass player Steve Spencer's dog. Guinness played a style of music inspired by bands like Yes, Pink Floyd, Emerson Lake and Palmer and Gentle Giant on one hand, and country rockers like Bruce Springsteen and Jimmy Buffett on the other. Mixing country rock and the concert style of rock music worked well for a while, and the band enjoyed some success on Sydney's Northern Beaches and Sydney city venues like Chequers, Frenchs and others. But the music was not really commercial and the band struggled to gain a steady following.[3] In late 1976, the group disbanded when David Stewart returned to America. Malcolm played in the club scene with a number of bands, while Steven embarked upon a career as a sound technician in the UK.[4]

But when The Farriss Brothers formed in 1977, Pengilly gave up the main vocalist responsibilities to Michael Hutchence.

As principal backing vocalist, saxophonist and guitarist, he contributes to a great deal of the music that INXS release. He has written, produced and performed numerous b-sides.[5] Pengilly was also the creator of the rare Happy Christmas record sent to early 1980s fanclub members in Australia and the United States.[5] His main instrument though is the guitar. "My eldest brother, Mark, gave me a beat up acoustic guitar when I was about nine and I taught myself playing along to records,"[cite this quote] Pengilly recalls. His position also sees him as the key publicity spokesperson, a role he does not take lightly. Pengilly also holds the distinction of being the band's archivist, faithfully logging daily entries in diaries that date back to the beginning of INXS.

Pengilly has one daughter, April Rose Pengilly (who is now an actor and model), born in 1988,[6] with his ex-girlfriend Karen Hutchinson. Hutchinson and Pengilly were together for ten years, in which time she toured with the band. In December 1993, Pengilly married singer Deni Hines. The marriage lasted ten months, and the two parted ways in early 1995. Hines sang backing vocals on INXS' "Not Enough Time". Pengilly was once engaged to freelance DJ Louise Hegarty; the relationship lasted for seven years.

He is currently married to former world women's champion pro surfer, Layne Beachley. They were married at their South Coast home in NSW in a private ceremony on 10 October 2010 at 10 am. In May 2007, Pengilly became an ambassador of The Eye Foundation.

This article uses material from the article Kirk Pengilly from the free encyclopedia Wikipedia and it is licensed under the GNU Free Documentation License.