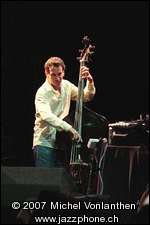 Grenadier studied at Stanford University and graduated in 1989 with a bachelor's degree in English Literature. At Stanford, he met Stan Getz, with whom he toured.

After graduating from Stanford, Grenadier moved to Boston to play with vibraphonist Gary Burton. In 1991, he moved to New York. He continued to collaborate with some of the musicians he had met during his time in Boston, such as Kurt Rosenwinkel, Joshua Redman, Mark Turner, Jorge Rossy, and Chris Cheek. Others he met for the first time in New York include Bill Stewart, Kevin Hays, Renee Rosnes, Ralph Moore, Billy Drummond, Danilo Perez, David Sánchez, Tom Harrell and Billy Hart. Grenadier continued his association with Joe Henderson, touring with his band which at times included Al Foster, Renee Rosnes and Larry Willis. He also spent a few months during his earlier years in New York playing in Betty Carter's band.

In the early 1990s, Grenadier first met and played with pianist Brad Mehldau. He joined Mehldau's Trio with drummer Jorge Rossy; together they toured and recorded for more than ten years. Rossy was replaced by drummer Jeff Ballard in 2004.

Grenadier has worked with guitarist Pat Metheny, with whom he toured as a trio along with drummer Bill Stewart. He credits his experiences touring with Metheny's trio as a significant learning experience.[1]

Grenadier is a member of FLY, a trio which includes drummer Jeff Ballard and tenor saxophonist Mark Turner. They have recorded three critically acclaimed albums. He also tours and records with his wife, singer-songwriter Rebecca Martin.

Grenadier lives with Rebecca and their son Charlie James in the Hudson Valley, north of New York City.

With Frank Wess and Johnny Coles

This article uses material from the article Larry Grenadier from the free encyclopedia Wikipedia and it is licensed under the GNU Free Documentation License.