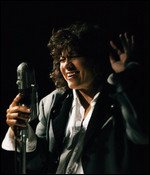 born in in Hamilton, Ontario, Canada

Rita Chiarelli is a Canadian blues singer. She has been dubbed "the goddess of Canadian blues" by CBC Radio One's Shelagh Rogers.

Born and raised in Hamilton, Ontario,[1] Chiarelli began performing in Ronnie Hawkins' band in the early 1980s. She subsequently spent several years in Italy. When she returned to Canada, she quickly attracted the attention of film director Bruce McDonald, who included her "Have You Seen My Shoes?" on the soundtrack to his 1989 film Roadkill. Chiarelli and Colin Linden subsequently recorded a cover of Bob Dylan's "Highway 61 Revisited" for McDonald's 1991 film Highway 61, and Chiarelli released her debut album the following year on Stony Plain Records.

Her albums Just Getting Started and Breakfast at Midnight were both nominated for the Juno Award for Best Blues Album.

This article uses material from the article Rita Chiarelli from the free encyclopedia Wikipedia and it is licensed under the GNU Free Documentation License.

Ludwig van Beethoven Rondo aus dem Klavierkonzert Nr. 5 Es-Dur op. 73
Update Required To play the media you will need to either update your browser to a recent version or update your Flash plugin.