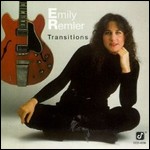 Born in Englewood Cliffs, New Jersey,[1] Remler began guitar at age ten. She listened to pop and rock guitarists like Jimi Hendrix and Johnny Winter. At the Berklee College of Music in the 1970s, she listened to jazz guitarists Charlie Christian, Wes Montgomery, Herb Ellis, Pat Martino, and Joe Pass.[2]

Remler settled in New Orleans, where she played in blues and jazz clubs, working with bands such as Four Play and Little Queenie and the Percolators before beginning her recording career in 1981. She was praised by veteran jazz guitarist Herb Ellis, who referred to her as "the new superstar of guitar" and introduced her at the Concord Jazz Festival in 1978.[2]

In a 1982 interview with People magazine, she said: "I may look like a nice Jewish girl from New Jersey, but inside I'm a 50-year-old, heavy-set black man with a big thumb, like Wes Montgomery."

Her first album as a band leader, Firefly, won acclaim, as did Take Two and Catwalk. She recorded Together with guitarist Larry Coryell. She participated in the Los Angeles version of Sophisticated Ladies from 1981–1982 and toured for several years with Astrud Gilberto. She also made two guitar instruction videos.

In 1985, she won Guitarist of the Year in Down Beat magazine's international poll. In 1988, she was artist in residence at Duquesne University and the next year received the Distinguished Alumni award from Berklee. Bob Moses, the drummer on Transitions and Catwalk, said, "Emily had that loose, relaxed feel. She swung harder and simpler. She didn't have to let you know that she was a virtuoso in the first five seconds."[3]

Her first guitar was her brother's Gibson ES-330. She played a Borys B120 hollow body electric towards the end of the 1980s. Her acoustic guitars included a 1984 Collectors Series Ovation and a nylon string Korocusci classical guitar that she used for bossa nova.

When asked how she wanted to be remembered she remarked, "Good compositions, memorable guitar playing and my contributions as a woman in music...but the music is everything, and it has nothing to do with politics or the women's liberation movement."

Remler bore the scars of her longstanding addiction[3] including heroin (which is believed to have contributed to her death) [4] and dilaudid.[3] She died of heart failure at the age of 32[1] at the Connells Point home of musician Ed Gaston, while on tour in Australia.

The album Just Friends: A Gathering in Tribute to Emily Remler, Vol. 1 was released in 1990, and volume 2 followed. Performers from the albums included Steve Masakowski, Herb Ellis, David Benoit, and Eddie Gómez.

David Benoit wrote the song "6-String Poet", from his album Inner Motion, as a tribute to Remler.[5]

In 2006, the Skip Heller Quartet recorded a song called "Emily Remler" in her memory.

This article uses material from the article Emily Remler from the free encyclopedia Wikipedia and it is licensed under the GNU Free Documentation License.