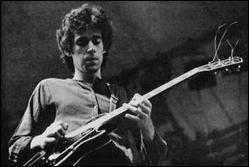 Connors was born in Los Angeles, California in 1949 and began to play the guitar at the age of fourteen. After three years of extensive self-study of the rock and blues influences that were his first inspiration, he began to play gigs around the Los Angeles area. He soon found his way to jazz, the music that would lead to a lifelong commitment.

"I'd been playing for about four years", he explained at the time of his RTF tenure, "and suddenly had an overnight change. I didn't want to be a blues guitarist anymore. I began listening to people like Bill Evans, Jim Hall, Wes Montgomery, [bassist] Scott LaFaro, Miles Davis, [John] Coltraneanyone who had a 'jazz' label. Django Reinhardt really got to me. The first time I heard one of his records, I thought that was just what I wanted to be. He had all the fire, creativity, and energy that rock players have today. And the amazing purity of his melodiesyou just knew they came from a totally instinctive place." [2]

He and Django differed however over the matter of electronics with Bill preferring the sound of the electric instrument. "I always wanted to use the electric guitar in a sophisticated context, like with Chick [Corea]. I like to play jazz with that electric-rock sound. For me it's a lot closer to a horn than the traditional guitar, and that's what I love about it; I can sustain notes, get into different kinds of phrasing -- do things other instruments do naturally, only the guitar does it with the aid of technology." [3]

Connors moved to San Francisco in 1972 to join the Mike Nock Group (formerly known as "The Fourth Way") with drummer Eddie Marshall and bassist Dennis Parker. He met up with drummer and vibraphonist Glenn Cronkhite, who would introduce him to a new depth of jazz sounds and study. In those early years in the city by the bay, Connors played with numerous top-flight musicians, including Cronkhite, bassist Steve Swallow and pianist Art Lande.

In 1973, after sitting in on a gig, Connors was signed on to Return to Forever, keyboardist and composer Chick Coreas pioneering fusion group that featured bassist Stanley Clarke and (then) drummer Steve Gadd.

"A miracle!" Bill claims. "Chick was my hero. I wanted to be Chick Corea on guitar. I didn't know him, but whenever I really wanted to get off on music I'd play some of his piano solos and Return To Forever songs. I heard that Chick was looking for a guitarist. Steve encouraged me to call Chick, and though I was very nervous, I did, and he invited me to come over to the club where he was working and sit in. I was so scared that I almost turned him down. But after running around and saying to everyone, 'Guess who I'm going to play with tonight,' and everyone telling everyone else, all this energy was formulatingand I took to my room and practiced my ass off." [4]

That night, the fright totally disappeared. "The minute I got up on stage I had this feeling like I'd been preparing for this all my life. I was so relaxed that I felt as though I was in my own living room. Chick and I played musical games -- he'd play these real simple lines and I'd be giving my interpretations of them, then go off into the Chick Corea 'outness.' I ended up in New York two weeks later." [5] With keyboardist and composer Chick Coreas pioneering fusion group that featured bassist Stanley Clarke and drummer Lenny White, Connors established himself on the national and international music scenes, touring in Japan and Europe, and recording the now legendary Hymn of the Seventh Galaxy.

In April 1974, after the band's tour of Europe and Japan, Bill quit the group. The musical direction seemed to him to be changing from what it was when Connors joined. He explains, "Everything started getting less aesthetic, more rock. Just too much like Mahavishnu (John McLaughlin (musician)). I was having trouble expressing myself the way I wanted to in that context." [6]

Connor's disenchantment with the group also stemmed from certain objections to Corea's Scientology-inspired leadership style. "Chick had a lot of ideas that were part of his involvement with Scientology. He got more demanding, and I wasn't allowed to control my own solos. I had no power in the music at all. Then, we'd receive written forms about what clothes we could wear, and graphic charts where we had to rate ourselves every night not by our standards, but his. Finally, we had to connect dots on a chart every night. I took all of it seriously because I had a lot of respect for Chick, but eventually I just felt screwed around. In the end, my only power was to quit." [7]

After Return to Forever

In 1974, Connors left Return to Forever, and began to explore the New York jazz and session scene, performing with guitarist John Abercrombie and keyboardist Jan Hammer, and recording with bassist Stanley Clarke. "It was great,"he states, "because it wasn't this contrived thing in order to communicate to the audience. We were *playing* again and *learning* again, and it felt real good." [8]

During this period, record dates with artists as diverse as vocalist Gene McDaniels and Stanley Clarke kept the guitarist's creative impulses occupied with a variety of challengesbut not for long. "Around 1975, I'd decided to become a classical guitar player", he muses. "I did my first solo album in 1974, and just decided on the spur of the moment to do it all on acoustic. That was just such a contrast from blowing people's ears off with my 200-watt Marshall that it really started to capture me." A further impetus came with Connors' discovery of classical artist Julian Bream. "I was sitting with his album 20th Century Guitar [RCA, LSC2964] -- a real classic -- and it has this piece by [German composer] Henze that I really loved. It was just getting to me, so I sat down for a couple of days and transcribed it -- on my steel-string guitar, with my funny pick-and-finger technique [laughs]. When I got it, it gave me so much pleasure that I said, 'Okay, I'm going to be a classical guitar player.' And that's what happened." [9]

Connors recorded his first solo album in 1974, Theme to the Guardian (ECM), making the switch from electric to acoustic guitar. At the same time, he began the next phase of his self-driven studies, taking it on himself to delve into transcriptions and studies of the works of classical guitarists. Two more recordings on acoustic guitar followed, 1977's Of Mist and Melting (ECM), with Connors as leader and on guitar, saxophonist Jan Garbarek, bassist Gary Peacock and drummer Jack DeJohnette and then, in 1979, another solo effort by the guitarist, Swimming with a Hole in My Body (ECM).

During 1976 and 1977, Connors also recorded with Lee Konitz, Paul Bley and Jimmy Giuffre in New York. He toured Europe, performing with composers Luciano Berio and Cathy Berberian. Connors then returned to electric guitar, performing and recording with Jan Garbarek on Places (1978) and Photo with Blue Sky, White Cloud, Wires, Windows and a Red Roof (1979), and with Tom Van Der Geld and Richard Jannotta in 1979 (Path, ECM).

For the past years, Connors has been giving private lessons while continuing his stylistic and technical studies of the works of jazz greats. Hes now playing plectrum style on a classical jazz guitar, an archtop electric.

This article uses material from the article Bill Connors from the free encyclopedia Wikipedia and it is licensed under the GNU Free Documentation License.