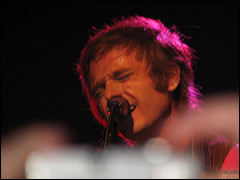 Paul Waaktaar-Savoy (born Pål Waaktaar Gamst, 6 September 1961) is a Norwegian musician and songwriter. He is best known for his work as the main songwriter and guitarist in the Norwegian pop band A-ha. He has written or co-written most of the band's biggest hits, including "The Sun Always Shines on T.V.", "Hunting High and Low", "Take on Me", the James Bond theme "The Living Daylights" and the ballad "Summer Moved On". In addition, Waaktaar-Savoy is also a painter.

Paul was the lead guitarist and main songwriter for A-ha, one of the most successful bands of the 1980s. Once "Q Magazine" named him as one of the best unknown lyricists of his generation. A-ha performed "Summer Moved On" live at the Nobel-Peace-Prize-Concert. After this, they decided to record a new album and, in 2000, A-ha had the comeback of the year, followed by a sold-out tour. The A-ha album "Lifelines" was released in 2002. The following tour was documented in A-ha's second official live album, How Can I Sleep with Your Voice in My Head, which was released in March 2003.

In 2004 the compilation album The Singles: 1984-2004 was released, their last album with WEA. After that A-ha signed to Universal. Analogue was released in 2005. The title-track entered the UK-charts on #10. The band's ninth studio album, "Foot of the Mountain" was released in 2009.

Paul has said "Morten is totally different from me. When we first came to London together, he burned all my clothes and re-dressed me from head to toe. I don't care much about clothes, whereas he's always very interested in them. He has given me self-confidence, encourages me to talk to people, not to be afraid and to use the abilities I have. Morten is actually the only one in Norway who had as much ambition as I did. I guess we both have big egos. In a way, we're each sitting in our own little world, while Mags is more down to earth. Mags often has to mediate between Morten and me... It's good that we're so different and still respect each other. The tension between us is creative. No one sings like Morten. He's got what it takes and I have great faith in him."[1]

With his wife, he has produced many CDs as the band Savoy. In 2001 Waaktaar released his fourth studio album, "Reasons to stay indoors", which was again a big success in Norway. On 30 August 2004, Savoy released their fifth studio album called 'Savoy' through their own label, Eleventeen Records.

Together with his wife, and drummer Frode Unneland, he has performed in the band Savoy. Savoy have achieved great success in Norway, selling over 300,000 records. They have been nominated for Spellemannsprisen (Norwegian equivalent of the Grammy Award) four times and have won three times.a-ha version of the song "Velvet" appears in the film One Night at McCool's and "Whalebone" appears in the highly acclaimed Norwegian film Hawaii, Oslo.

With Jimmy Gnecco he presented Weathervane as a new project in June 2011. Their self-titled single (Weathervane) will be on the soundtrack for the movie Headhunters (based on the book "Hodejegerne" of Jo Nesbø).

On Saturday 8th February 2014 at 10:00am EST Paul premiered a new track under the name Waaktaar through a-ha.com. The track is called 'Manmade Lake'.

Waaktaar-Savoy has painted all his life. His trademark is not starting to paint until the canvas has been fitted with a frame. This trait was played upon in his debut and so far sole exhibition "Rammer" (meaning "Frames" in Norwegian) in Lillehammer, Norway in 1998.[11]

Descriptions by the rest of A-ha

Magne Furuholmen describes Waaktaar-Savoy thus: "Pål is the person who has meant most to me in my musical development and yet hes the one person I find it most difficult to say anything sensible about. He has incredible will-power and a watchful eye, always searching for material he can use creatively. In a way, I have idolized Pål for years and I still depend on him to help me sort out my own ideas.[12]

Morten Harket describes Waaktaar-Savoy thus: "Pål has unbelievable self-discipline and is a workaholic. He can keep working on what appears to be the same thing over and over again. While I go crazy when I have to go over a song hundreds of times, he can sit with it for hours, trying to find exactly the right mix to achieve the sound he wants. Pål is really the driving force behind A-ha. Hes one of the few real artists on the pop rock scene. It's always exciting to hear what he's written.[12]

Waaktaar-Savoy was born in Oslo, Norway in 1961 and grew up in the Manglerud suburb. He is a distant relative of Norwegian footballer Morten Gamst Pedersen.[13] He is married to American filmmaker and musician Lauren Waaktaar-Savoy and they have one child together, True August Waaktaar-Savoy (b. 1999). The family divides its time between New York and Oslo, Norway.

This article uses material from the article Paul Waaktaar-Savoy from the free encyclopedia Wikipedia and it is licensed under the GNU Free Documentation License.