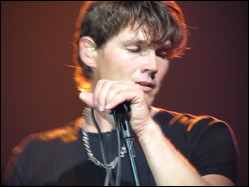 Morten Harket (born 14 September 1959) is a Norwegian musician, best known as the lead singer of the synthpop/rock band A-ha, which released ten studio albums and topped the charts internationally after their breakthrough hit "Take On Me" in 1985.[1] A-ha disbanded in 2010 after they played their last gig in Oslo. In 2015, after each member pursued his own artistic path, A-ha reunited to produce a new album, Cast In Steel, and perform a world tour, kicking off at Rock in Rio in Rio de Janeiro, Brazil on 27 September 2015. Harket has also released six solo albums. Before joining A-ha in 1982, Harket had appeared on the Oslo club scene as the singer for blues outfit Souldier Blue.

The trio, composed of lead vocalist Harket, guitarist Paul Waaktaar-Savoy (Pål Waaktaar until his marriage in 1994), and keyboardist Magne Furuholmen, formed on 14 September 1982, and left Norway for London in order to make a career in the music business. They chose the studio of musician, producer, and soon-to-be-manager, John Ratcliff, because it had a Space Invaders machine. Ratcliff introduced the band to his manager, Terry Slater, and, after a few meetings, A-ha had two managers. Slater and Ratcliff together formed T.J. Management. Ratcliff dealt with all the technical and musical aspects; Slater was the international business manager and liaison to Warner Brothers' head office.[1] The band says the name A-ha comes from a title Paul contemplated giving to a song; he was dithering between the title "A-ha" and "A-hem". Morten was looking through Paul's notebook, and came across the name, which he liked, and immediately decided that was the right name.[2]

In 1984, A-ha released their first single, "Take On Me", which became a hit only on the third attempt in 1985, after it had been re-recorded and accompanied by a music video directed by Steve Barron. The single's international success helped A-ha's debut album Hunting High and Low to sell over 10 million copies worldwide. Their second studio album was Scoundrel Days, followed by Stay on These Roads and East of the Sun, West of the Moon. The band then issued the commercially disappointing Memorial Beach, after which the band went on hiatus.

Harket re-joined his colleagues in A-ha in 1998[3] to perform at the Nobel Peace Prize concert. Since 1998, A-ha has released four studio albums and several compilations. Their eighth studio album Analogue was released in 2005, and became a big hit worldwide, achieving Platinum certification in the UK. The band's last studio album before their split, Foot of the Mountain, was released in the spring of 2009.

Harket held a note for 20.2 seconds in A-ha's 2000 song "Summer Moved On", believed to be the longest note in UK chart history.[4] The note held exceeds the chest voice note in Bill Withers' famous song Lovely Day by 2.2 seconds.

In October 2009, A-ha announced that they would disband after a farewell tour in 2010. Tickets for A-ha's final concert at the Oslo Spektrum on 4 December 2010 sold out within 2 hours.

On 27 September 2015, A-ha reunited for a huge crowd assembled at Rock in Rio 2015 festival in Rio de Janeiro, Brazil, which led to a reunion tour and the Cast in Steel album.

In June 2017 the band performed for MTV Unplugged in their homeland. The performance was released as a live album that September.

As a band member

Paul Waaktaar-Savoy describes Harket as being "totally different from me." He recalls the band's first visit to London together, during which Harket burned all his clothes and re-fashioned his wardrobe. "He has given me self-confidence, encourages me to talk to people, not to be afraid and to use the abilities I have. Morten is actually the only one in Norway who had as much ambition as I did. I guess we both have big egos. In a way, we're each sitting in our own little world, while Mags is more down to earth. Mags often has to mediate between Morten and me... It's good that we're so different and still respect each other. The tension between us is creative."[5]

Magne Furuholmen describes Harket as "together". Furuholmen says Harket "believes strongly in everything he does. This goes for the band too, and it rubs off on us. He has the courage of his own convictions and cannot be shaken. He's an expert at always getting the last word, whether he's right or not. Morten is very loyal and he's fair when it comes to giving people a chance, letting them show who they are and what they're worth before judging them."[5]

Before Morten joined Pål and Magne, he was the lead singer of a soul band called "Souldier Blue".[14] In 1993, Harket performed a cover of "Can't Take My Eyes Off You" by Crewe/Gaudio on the Coneheads movie soundtrack in 1993.[15] After A-ha went on a hiatus in 1994, Harket pursued a solo career, and has so far released six studio albums. Two of those albums were sung in Norwegian, but his 1995 album, Wild Seed, became more of an international success because of its English lyrics. Harket worked with Håvard Rem, a Norwegian poet, to write most of the songs. "A Kind of Christmas Card" and "Spanish Steps" were the most successful numbers. The rest were either easy listening songs, or more profound songs, such as "East Timor" and "Brodsky Tune" which had political messages in them.

Harket has collaborated in live performances and in studio recordings with several artists. Among them, Pakistan rock band Junoon on the song "Piya", Hayley Westenra on "Children First". He has also performed and worked with many other Scandinavian artists such as Bjørn Eidsvåg, Silje Nergaard, Oslo Gospel Choir, Espen Lind, Elizabeth Norberg-Schulz and Carola Häggkvist. On A-ha recordings, Morten has sung with Graham Nash, Lissie, Alison Moyet, Ian McCulloch, Ingrid Helene Håvik and Anneli Drecker.

Harket released another solo album, Letter from Egypt, on 28 May 2008 via Universal Records Germany.[16] In 2009 Harket created and performed the main theme of A Name is a Name, a film about Macedonia by Sigurjon Einarsson.[17] In April 2012 Harket released his new solo album, Out of My Hands in both Norway and Germany, and on 14 May in the UK.. In April 2014, Harket released his sixth album titled "Brother". He also composed a song with his cousin's son, Blade Whitehead, for an annual music night. [18]

In addition to the numerous A-ha and solo concerts, Harket has also performed on various other shows & concerts as solo artist and with A-ha. Some notable ones:

Morten Harket is known for his vocal range, which some sources have claimed spans five octaves,[25][26] although Harket himself said in 2009, "I've never counted, quite honestly".[27] His voice is capable of "the greatest falsetto in the history of pop music EVER...", according to NME's Sylvia Patterson,[28] to an "unyielding groan" as described in Entertainment Weekly.[29] Sound engineer Gerry Kitchingham, who worked with A-ha on "Take On Me", described Harket as "an excellent singer" with "this incredibly strong falsetto and almost choir-boyish clarity".[30]

The son of Reidar, a chief physician at a hospital, and Henny, an economics teacher[31] and brother to Gunvald, Håkon, Ingunn and Kjetil, Morten grew up in Asker in southern Norway. Early musical influences included Uriah Heep,[32] Jimi Hendrix,[32] Queen, Johnny Cash, Simon and Garfunkel, David Bowie, and James Brown. Morten's father had contemplated becoming a classical pianist; Morten also took piano lessons for a while but lacked the discipline to practice.[31] At the age of four he started writing music and playing piano.[33]

Harket has three children with his ex-wife Camilla Malmqvist Harket, to whom he was married between 11 February 1989 and 1998: Jakob Oscar Martinus Malmqvist Harket (b. 14 May 1989), Jonathan Henning Adler Malmquist Harket (b. 30 December 1990), and Anna Katharina Tomine Malmquist Harket (b. 14 April 1993, she uses Tomine as her first name). Harket also has a daughter, Henny, (born 7 February 2003), with then-girlfriend Anne Mette Undlien. Harket has another daughter, Karmen Poppy, (born 7 September 2008), with Inez Andersson.[27][34]

This article uses material from the article Morten Harket from the free encyclopedia Wikipedia and it is licensed under the GNU Free Documentation License.