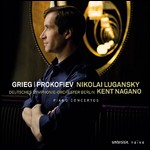 Nikolai Lugansky ( ; born 26 April 1972) is a Russian pianist from Moscow. At the age of five, before he had even started to learn the piano, he learned a Beethoven piano sonata completely by ear and performed it from memory.[1] He studied piano at the Moscow Central Music School and the Moscow Conservatory. His teachers included Tatiana Kestner, Tatiana Nikolayeva and Sergei Dorensky.

During the 1980s and early 1990s, Lugansky won prizes at numerous piano competitions. At the same time he began to make recordings on the Melodiya (USSR) and Vanguard Classics (Netherlands) labels. His performance at the Winners' Gala Concert of the 10th International Tchaikovsky Competition was recorded and released on the Pioneer Classics label, on both CD and video laser disc formats. This was followed by more recordings for Japanese labels. He went on to make recordings for Warner Classics (UK), Pentatone Classics (Netherlands), Onyx Classics and Deutsche Grammophon. He currently makes recordings for Naïve Classics.

In addition to performing and recording, Lugansky teaches at the Moscow Conservatory.

This article uses material from the article Nikolai Lugansky from the free encyclopedia Wikipedia and it is licensed under the GNU Free Documentation License.

Isaac Albéniz "Sevilla" aus "Suite Española" op. 47
Update Required To play the media you will need to either update your browser to a recent version or update your Flash plugin.