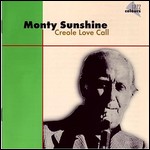 Monty Sunshine (9 April 1928 – 30 November 2010[1]) was an English jazz clarinetist, who is known for his clarinet solo on the track "Petite Fleur", a million seller for the Chris Barber Jazz Band in 1959.[1] During his career, Sunshine worked with the Eager Beavers, the Crane River Jazz Band, Beryl Bryden, George Melly, Chris Barber, Johnny Parker, Diz Disley and Donegan's Dancing Sushine Band.[1]

Born in Stepney, London,[1] he along with Lonnie Donegan, Jim Bray and Ron Bowden, formed the back line of what was the embryo Chris Barber Band. Ken Colyer was the first trumpet player, with Sunshine on clarinet, and the original 1953 band took the Colyer name until there was a split from Colyer in May 1954. Pat Halcox, who only turned the band down originally as he wanted to carry on his studies, took over the spot, and the band formally adopted the Chris Barber Jazz Band as its title.

The band quickly made an international reputation following their inaugural tour of Denmark, before their professional debut in the United Kingdom. Sunshine stayed with the band for several years, until he left around 1960, to be replaced by Ian Wheeler.[2] He formed his own band, staying true to the original six man line up, whilst Barber expanded his band membership to seven, then eight and finally to eleven.

Sunshine returned to play a reunion concert with the original Chris Barber Band at the Fairfield Halls, Croydon in June 1975. This was well received, and the band reformed once again for an international reunion tour in 1994. Sunshine retired from music around 2001.

Monty Sunshine's discography is extensive, and CDs have been issued of recordings with Colyer and Barber, as well as with his own band.

Monty Sunshine's great-great-grandparents had come to England from Romania and had anglicised their surname to Sunshine.

This article uses material from the article Monty Sunshine from the free encyclopedia Wikipedia and it is licensed under the GNU Free Documentation License.