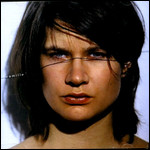 Camille Dalmais, better known by her mononym Camille (born in March 10, 1978 in Paris, France), is a French singer, songwriter and occasional actress.

Camille was born and raised in Paris, France. As a teenager she studied ballet and developed an interest in bossa nova music and American stage musicals.[1] She attended the prestigious Lycée International de Saint Germain-en-Laye where she obtained her baccalaureate in literature. Thanks to her mother being an English teacher, she grew up learning to speak English fluently. She performed her first original song "Un Homme Déserté" at the age of sixteen while attending a wedding.[1] In the early 2000s, while performing at jazz clubs in Paris, Camille made her acting début in the film Les Morsures de l'Aube (by Antoine de Caunes; with Asia Argento and Guillaume Canet). She also contributed to the song "La Vie la Nuit" in its soundtrack.[1]

In early 2002, Camille signed a recording contract with Virgin Records. She released her first studio album Le Sac des Filles. In 2004, she began working with Marc Collin and his band Nouvelle Vague, which incorporates new wave and bossa nova music.[1] She contributed vocals to the songs "Too Drunk to Fuck", "In a Manner of Speaking", "The Guns of Brixton", and "Making Plans for Nigel" on their first album.[3]

In June 2007 Camille performed Benjamin Britten's A Ceremony of Carols and a new a cappella work God is sound (The 12 World Prayers) at L'église Saint-Eustache, Paris.

Also in 2007, she contributed to the soundtrack of Pixar's Ratatouille in the song entitled "Le Festin". This style of music, which may be termed "typical Parigot street singing", is also found in the movie Porco Rosso in the song "Le Temps des Cerises". Additionally, she provides the European French dub voice of Collette in Ratatouille.

Her song, "Ta douleur" was featured in the American television program Saturday Night Live. The original sketch aired in October 2010 titled "Les jeunes de Paris" hosted by actress Emma Stone. In March 2011, singer Miley Cyrus showcased this song in a similar sketch. The skit which seemed inspired by Jean-Luc Godard's Band of Outsiders was entirely in French and involved a dance off to the song.

She contributed to the track "Putain putain" on Nouvelle Vague's 2010 album Couleurs Sur Paris for whom she had previously done work for on their first album. Recently she appeared on Jérôme Van Den Hole's self-titled album on the track, "Debout".

Her song "Pour que l'amour me quitte" from her 2005 album Le Fil was covered in Italian superstar Elisa's 2010 acoustic album Ivy in collaboration with her colleague Giorgia.[6]

On November 18, 2010, she gave birth to a son named Marius, whose father is musician and percussionist Clément Ducol.[7] She is an atheist.[8]

This article uses material from the article Camille (singer) from the free encyclopedia Wikipedia and it is licensed under the GNU Free Documentation License.