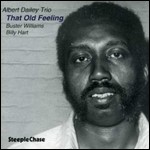 Dailey's first professional appearances were with the house band of the Baltimore Royal Theater in the early 1950s. Later in the decade he studied at Morgan State University and the Peabody Conservatory. He backed Damita Jo DuBlanc on tour from 1960 to 1963, and following this briefly put together his own trio in Washington, D.C., playing at the Bohemian Caverns. In 1964 he moved to New York City, where he played with Dexter Gordon, Roy Haynes, Sarah Vaughan, Charles Mingus, and Freddie Hubbard. In 1967 he played with Woody Herman at the Monterey Jazz Festival, and played intermittently with Art Blakey's Jazz Messengers around this time. In the 1970s he played with Sonny Rollins, Stan Getz, Elvin Jones, and Archie Shepp. In the 1980s he did concerts at Carnegie Hall and was a member of the Upper Manhattan Jazz Society with Charlie Rouse, Benny Bailey, and Buster Williams. He died of pneumonia in 1984.

This article uses material from the article Albert Dailey from the free encyclopedia Wikipedia and it is licensed under the GNU Free Documentation License.

Giuseppe Verdi "Va pensiero" Gefangenenchor aus der Oper "Nabucco"
Update Required To play the media you will need to either update your browser to a recent version or update your Flash plugin.