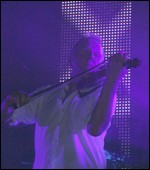 William Lee "Billy" Currie (born 1 April 1950, Huddersfield, West Yorkshire, England[1]) is an English violist, violinist, pianist, keyboardist, and songwriter. He is best known for his work with new wave band Ultravox, who achieved their greatest commercial success in the 1980s.

In 1974, Currie left the art group Ritual Theatre to join the glam rock band Tiger Lily on viola and keyboard. In 1976, after several name changes, the band ultimately became Ultravox and recorded three albums, Ultravox!, Ha!-Ha!-Ha! and Systems of Romance, before singer John Foxx left to pursue a solo career in March 1979.

During Ultravox's subsequent hiatus, Currie dedicated himself to different projects. He collaborated with Gary Numan who had admired the Systems Of Romance album and asked Currie to record some songs that were included on his first solo album, The Pleasure Principle. Currie toured with Numan's band during 1979. During soundchecks for the tour Currie, with Gary Numan band musicians Chris Payne and Cedric Sharpley began to develop a song of their own called "Toot City". Currie had also joined the studio-based band Visage, fronted by Steve Strange, that also included Midge Ure. Currie and Ure developed a solid working relationship. Visage drummer Rusty Egan encouraged Currie to ask Ure to join the defunct Ultravox as lead singer/guitarist. Whilst composing material for a new Ultravox album and for the debut Visage album, Ure collaborated with Currie on the "Toot City" track which eventually became "Fade to Grey". The single became a huge hit for Visage in early 1981. However, this was surpassed by Ultravox's hit "Vienna", released around the same time. Both Ultravox and Visage became highly successful recording acts in the early 1980s. Ure decided to leave Visage to focus on Ultravox full-time in 1982. Currie remained with Visage for a while longer, but he too had left by 1984.

From 1980–86, Ultravox released seven top 10 albums, including a live album and a "greatest hits" compilation and featured in Live Aid in Wembley Stadium on 13 July 1985. During the last days of the band, there were tensions between Currie and Ure. With an underwhelming response to their 1986 album U-Vox, the band effectively disintegrated.

In 1988, Currie put out an instrumental solo album Transportation, released on the IRS NoSpeak record label. Steve Howe played guitar on some of the tracks.

In 1992, Currie reformed Ultravox with a new line-up (himself being the only original member involved). With Tony Fennell on vocals, they recorded the album "Revelation". At the outset of the subsequent tour, Fennell left to be replaced by Sam Blue. The tour took in the former USSR and Malta amongst other locations. Many of the synthesisers for which Currie was famous, apart from the often-volatile OSCar and Minimoog, were abandoned for this tour, replaced with Korg Wavestations and T-series keyboards. A further Ultravox album featuring this line-up, "Ingenuity", was released in 1994. Both albums were commercially unsuccessful.

In 2009 and 2010, the "classic" Ultravox line-up from the 1980s (Currie, Ure, Chris Cross, and Warren Cann) reformed for two successful tours – their first together in over twenty years.

Currie is noted for his use of analogue synthesisers, such as the Elka Rhapsody, and in particular his trademark soloing sound, which typically consisted of soaring fluid lines on an ARP Odyssey, making use of oscillator sync, later re-created with the Oxford Synthesiser Company "OSCar" synth. Currie's original instrument whilst at music college was the viola, and he frequently added solo violin or viola to the arrangements of songs he played on, a relatively unusual choice in pop music. At the height of Ultravox's career, Billy Currie's keyboard rig included a Yamaha CP70 electric piano and SS30 string machine, CS80 synthesiser, a PPG Wave 2.2 digital synth, a Sequential Circuits Prophet T8 synth as well as his trademark ARP Odyssey. Other synths used by Ultravox included the Moog MiniMoog, Yamaha GS1 (the pad sound on "Lament") and Emulator II sampler.

Currie is married to Heidi and has an adult son named Tom and daughter. He lives in North London.

With Dead or Alive

This article uses material from the article Billy Currie from the free encyclopedia Wikipedia and it is licensed under the GNU Free Documentation License.