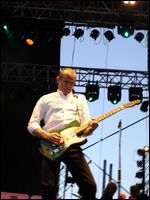 Francis Dominic Nicholas Michael Rossi, OBE (born 29 May 1949) is an English singer, songwriter and musician. He is best known as the co-founder, lead singer and lead guitarist of the rock band Status Quo.

Rossi[1] was born on 29 May 1949 in Forest Hill, London. His father's side of the family were Italian ice cream merchants responsible for the Rossi's Ice Cream parlours, and his mother was a Northern Irish Roman Catholic from Liverpool.[2][3] Rossi grew up in a household with his parents, grandmother, and "lots of aunts and uncles", and was given a Roman Catholic upbringing, having been named after Saint Francis of Assisi.[4] He attended Our Lady and St Philip Neri Roman Catholic Primary School in Sydenham, and Sedgehill Comprehensive School for high school, from which he was expelled on his last day.[5] It was at Sedgehill where Rossi met Alan Lancaster, with whom he formed the band "The Scorpions" - a predecessor to Status Quo.[6] Rossi's desire to become a musician began after seeing The Everly Brothers live on television at a young age, after which he asked his parents to buy him a guitar for Christmas.[4]

In 1962 when Rossi was attending Sedgehill Comprehensive School, he became close friends with future Status Quo bassist Alan Lancaster while playing trumpet in the school orchestra.[7] The two, along with other classmates Alan Key (drums) and Jess Jaworski (keyboards), formed a band called "The Scorpions", who played their first gig at the Samuel Jones Sports Club in Dulwich. Key was later replaced by Air Cadets drummer[7] and future "Quo" member John Coghlan, and the band was renamed "The Spectres". The Spectres wrote their own material and played live shows, and in 1965 they played at a Butlins holiday camp in Minehead. It was here that Rossi met his future long-time Status Quo partner Rick Parfitt, who was playing as part of another band called "The Highlights". The two became close friends and agreed to continue working together. In 1966, The Spectres signed a five-year deal with Piccadilly Records, releasing three singles that failed to chart. The group again changed their name, this time to "Traffic Jam", after embracing psychedelia.[6][8][9]

In 1967, Traffic Jam changed its name to "The Status Quo", but would eventually drop the definite article. Rossi had written a song called "Pictures of Matchstick Men", which hit the charts in both the UK and the US. Shortly afterwards, Parfitt joined the band, completing the original lineup, and beginning an almost 50-year partnership with Rossi until Parfitt's death in 2016. After some years of minor success, the band came to fame in 1972 with their album Piledriver on Vertigo Records with "Paper Plane", a song penned by Rossi and Bob Young, released as a single. With the band's fame, Rossi became famous as their charismatic frontman.[8] "Quo" would continue to enjoy major success in the UK, Europe, Japan, Australia and New Zealand through the 1970s and 1980s.[7] They were the opening act of 1985's Live Aid, and Rossi wrote and co-wrote some of their most famous songs, including "Caroline" and "Down Down".

Rossi and Parfitt were the only remaining original members in the band until Rick Parfitt's death in 2016. In 2013 and 2014, Rossi and Parfitt reunited with original Quo bandmates Lancaster and Coghlan for a series of reunion concerts on what would be called the "Frantic Four" tour. To this date, Quo have sold over 128 million albums worldwide.[7]

In 1984, the year before Quo would open Live Aid, Rossi and Parfitt appeared on the Band Aid charity single, "Do They Know It's Christmas?" Rossi has also enjoyed minor success with brief projects outside Quo. In 1985 when the band was on hold, he recorded two singles and a (so far unreleased) album – which was provisionally titled Flying Debris – with his longtime writing partner Bernie Frost. The single releases were "Modern Romance (I Want to Fall in Love Again)" (UK No. 54[10]), and "Jealousy". In 1996 he issued a solo album, King of the Doghouse, which was not a commercial success, although it produced a UK No. 42 single, "Give Myself to Love".[10] Some years earlier, in 1976, he appeared on the soundtrack album and film All This and World War II comprising cover versions of songs by The Beatles. Although the album sleeve credits the performance of "Getting Better" to Status Quo, the track featured Rossi's vocals and the London Symphony Orchestra. In 1977, he produced and played guitar on John Du Cann's solo album The World's Not Big Enough. 3 May 2010 saw the release of his second solo album, One Step at a Time, including a re-recording of Quo's 1973 classic "Caroline".

In 2013, Rossi starred as himself alongside Quo bandmate Parfitt in the adventure comedy film Bula Quo!, which followed the duo on an adventure in Fiji, getting involved in local Mafia operations on the island.

Rossi's guitar of choice is the Fender Telecaster, and he has used several over the years including his trademark green 1957 (actually a 1966 'no striped' maple neck Telecaster) model with a maple fretboard, which he purchased in 1968 for £70. It was originally sunburst, but was painted green in 1970. Through the years several parts had been replaced with G&L parts, and a third pickup had been installed in a configuration much like a Stratocaster. He also owns two other green Fender Telecasters that are both brighter in colour and feature rosewood fretboards. One is used for the song "Down Down" and the other for "Whatever You Want". Like his main guitar they are both in a three-pickup configuration.

After 46 years of use, in December 2014 Rossi was said to be "heartbroken" when the trademark green Telecaster finally become worn beyond use - the wood having become too soft to be able to properly tune the instrument.[11]

For amplification Rossi uses Marshall JCM800 or JCM900 Lead series amplifiers with 4x12 cabinets and a Roland GP8 to boost his signal. The sound from his Marshall rig is blended with Vox AC30 amplifiers that are kept behind his Marshall setup. He also uses software like Amplitube in the studio.[12]

Rossi, along with the rest of Status Quo, has often been accused of being "uncool", even by Rossi himself, calling Status Quo circa 1974 "the most uncool band in the world" in March 2013.[13] Since the early days of the band, Rossi has worn an earring in his left ear. On stage, Rossi would normally sport a black waistcoat, blue jeans and a pair of white trainers. In a December 2000 review of a Status Quo concert at Wembley Arena, Andrew Gilchrist writing for The Guardian called the white trainers "the only "visual" [the band] really have", referencing their simplistic stage show.[14]

Interviewed by Simon Hattenstone for The Guardian in 2007, Rossi explained that he had idolised Little Richard saying, "I think that's where we got the energy. To me it's synonymous with doing rock'n'roll. If you don't commit physically, rock'n'roll doesn't really work." Asked about his food preferences Rossi said, "My favourite is pasta e fagioli, pasta with beans, soupie thing, gorgeous. The older I get, the more I'm into food. ... When you grow up with Italians, food is important. I've always been like that with food. Apart from when I was doing cocaine - there was no food whatsoever then."[15]

History with drugs and alcohol

Rossi is now teetotal and stays away from drugs, but in the past had an archetypical "rock and roll lifestyle" of alcohol and drug habits, which made him and Parfitt notorious at the height of the band's fame. Rossi has claimed to have spent £1.7 million on cocaine in the 1980s.[20] This heavy cocaine use resulted in a piece of his nasal septum falling out, leaving a hole inside his nose which he once "pushed a cotton bud through during a TV interview" in order to demonstrate the dangers of drug addiction to young people.[21] In October 2014, Rossi told BBC's HARDtalk that alcohol was the gateway that led to his cocaine habit.[22]

Despite his teetotalism, in 2010 Rossi became chairman of the Glen Rossie brand of whisky, which the band used to drink whilst on tour.[23]

After being estranged from Rossi for seventeen years after his relationship with rock publicist Elizabeth Gernon broke up, daughter Bernadette and her father were reunited in 2007, and Bernadette and The North supported Status Quo on that year's tour.[24] In a 2011 interview with The Guardian, Rossi described himself nowadays as a "lapsed Catholic", and "generally anti-religion". When not touring, he enjoys spending time at home with his family.[4]

Rossi was appointed Officer of the Order of the British Empire (OBE) in the 2010 New Year Honours for services to music and charity, along with Parfitt.[1][25] Rossi said "It's one thing going out to play in front of 50,000 people but talking to the Queen - well that's quite another. We were both so humbled by the experience. I mean, this is the Queen after all. She is England, isn't she? We have grown up with her as our figurehead since we were tiny children and she's still going strong at 83. Not a very rock and roll thing to say I know, but she is simply amazing."[26]

Rossi married his second wife Eileen in 1989[27] and has eight children from his two marriages. Interviewed in 2011, he said that all of his children played music professionally.[17][4]

This article uses material from the article Francis Rossi from the free encyclopedia Wikipedia and it is licensed under the GNU Free Documentation License.