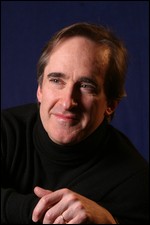 James Conlon (born March 18, 1950)[1] is an American conductor of opera, and symphonic and choral works. He is Music Director of Los Angeles Opera and Principal Conductor of the Italian RAI National Symphony Orchestra. He was the long serving director of the two-week Cincinnati May Festival[2] from 1979 through 2016. From 2005 to 2015, he was music director at the Ravinia Festival, the summer home of the Chicago Symphony Orchestra.[3] He is known for his efforts in reviving music by composers suppressed during the Nazi regime.[4]

Conlon grew up in a family of five children on Cherry Street in Douglaston, Queens, New York City. His mother, Angeline L. Conlon, was a freelance writer. His father was an assistant to the New York City Commissioner of Labor in the Robert F. Wagner administration.[5] His siblings were not musically inclined, nor were his parents. When he was eleven, he went to a production of La traviata by an amateur company founded by the mother of a friend (Edith Mugdan, the mother of the young Conlon's best friend, Walter Mugdan, and the founder of the North Shore Opera [6]). He asked for music lessons and became a treble (boy soprano) in a children's chorus in an opera company in Queens. He dreamed about being a tenor, then a baritone, and even wanted to sing the role of Carmen at one point. Finally it dawned on him that the only way to do everything in opera was to become an operatic conductor.[7]

He entered The High School of Music & Art at the age of fifteen and at eighteen he was accepted into the Aspen Music Festival and School conducting program, and in September, 1968 he entered The Juilliard School of music. In 1970, the Juilliard Orchestra took an educational tour to Europe and he was invited to Spoleto the next year as an assistant doing work as a répétiteur, coach and chorus conductor. During that time, he conducted one performance of Boris Godunov. He recalled that he had fallen in love with this opera at a young age, and had dreamed that it would be the first opera he would conduct.[7]

In 1972, at a scheduled Juilliard production of La bohème directed by Michael Cacoyannis, conductor Thomas Schippers suddenly pulled out. At the time, Maria Callas was doing a series of master classes at Juilliard and heard Conlon in rehearsal. She suggested to Juilliard's president, Peter Mennin, that Conlon should step in to conduct.[8]

Conlon received the conducting award of the American National Orchestral Association and in 1974 became the youngest conductor engaged for the New York Philharmonic Orchestra's subscription series. In 1976 he made his Metropolitan Opera debut and his British debut with the Scottish Opera, and in 1979 he debuted at Covent Garden. He was named director of the Cincinnati May Festival in 1979, which he has acted as every year since. After engagements with the Paris Opéra, Maggio Musicale in Florence, Rotterdam Philharmonic Orchestra and the Chicago Lyric Opera, Conlon became chief conductor of the Cologne Opera in 1989. In 1996 he was appointed music director of the Opéra National de Paris while serving concurrently as Music Director of the city of Cologne, Germany.[9]

Since his New York Philharmonic debut in 1974 at the invitation of Pierre Boulez, Conlon has appeared with virtually every major North American and European orchestra. He has also appeared with many of the world's major opera companies, including Teatro alla Scala (Milan), the Royal Opera at Covent Garden (London), the Lyric Opera of Chicago, and the Maggio Musicale Fiorentino (Florence). Associated for almost 30 years with the Metropolitan Opera, where he made his debut in 1976, he has conducted more than 250 performances there, leading a wide range of works from the Italian, German, French, Russian and Czech repertoires.

Since the 2006/07 season, Conlon is the Music Director of Los Angeles Opera. His work at LA Opera has included a series called "Recovered Voices", a multi-year project during which Conlon presented operas by composers affected by the Nazi regime. The series included a double-bill of Alexander von Zemlinsky's Der Zwerg and Viktor Ullmann's Der zerbrochene Krug, and operas by composers such as Schreker and Braunfels. In an effort to establish a Wagnerian tradition in Los Angeles, Conlon has conducted seven Wagnerian works at LA Opera, including the first ever performances in LA of Wagner's Der Ring des Nibelungen in 2008/09. In 2013, Conlon, whose lifelong fascination with Britten was reflected in a personal three-year performance cycle of the composer's works in America and Europe, spearheaded Britten 100/LA: A Celebration, a Los Angeles countywide collaboration featuring performances, conferences and exhibitions.[10]

Conlon was Music Director of Ravinia Festival, the summer home of the Chicago Symphony Orchestra from 2005 to 2015. He was Music Director of the two-week Cincinnati May Festival from 1979 to 2016 providing artistic leadership for more May Festivals than any other music director in the festival’s history and holds a place among the longest-tenured music directors of any major classical music institution in the United States.

Conlon recently completed a two-year artist residency with his alma mater, The Juilliard School. During the residency, Conlon worked with the school's young artists in its three divisions – dance, drama, music – in an educational project meant to promote growth and historical curiosity in students and audience members alike. The cross-genre project consisted of performances, symposia, master classes, and coaching. In addition to study and performance of the lesser-known repertoire of composers affected by the rise of Nazism and the events of World War II, of which he is an ardent champion, Conlon moderated symposia and spoke about the role of the artist in current times.

Composers from the Holocaust Era

In an effort to raise public consciousness to the significance of works of composers whose lives and compositions were affected by the Holocaust, Conlon has devoted himself to extensive programming of this music in North America and Europe. This includes the works of such composers as Alexander von Zemlinsky, Viktor Ullmann, Pavel Haas, Kurt Weill, Erich Wolfgang Korngold, Karl Amadeus Hartmann, Erwin Schulhoff, and Ernst Krenek. In addition to "Recovered Voices" at LA Opera, each summer when he was music director of the Ravinia Festival Conlon presented a different composer from this group with the Chicago Symphony Orchestra. He has highlighted works of Viktor Ullmann, Erwin Schulhoff, and Alexander von Zemlinsky thus far. A production of Ullman's Der Kaiser von Atlantis, conceived by Conlon, has traveled extensively since its first showing in New York. Produced in cooperation with The Juilliard School, it has since been reprised at the Spoleto Festival in Italy, the Ravinia Festival, in cooperation with the New World Symphony Orchestra, The Houston Grand Opera and the Los Angeles Philharmonic, where it was performed in 2004 at the Wilshire Boulevard Temple.

Conlon is committed to working with young pre-professional musicians and, in addition to his continual work with Juilliard ensembles, has devoted his time to teaching at the Aspen Music Festival and School and Tanglewood Music Center. He is actively involved in the Ravinia Festival's Steans Institute for Young Artists as well as Ravinia's model community outreach and education programs, and plans to help lead and expand educational projects during his tenure at Los Angeles Opera. Conlon has been active with the Van Cliburn International Piano Competition since 1997, where he not only conducts the final round of the competition, but also initiated a program through which he leads master classes and coaches finalists. His work in several Cliburn competitions was taped and aired in a special series on PBS, the most recent of which debuted in spring 2006, and the Final Round concerts comprising the concerti and recital performances, rehearsals, symposia including “A Talk with James Conlon,” and the awards ceremony, were webcast live during the 2009 competition. He is also featured in the final round section of the 2001 Van Cliburn Competition documentary film The Cliburn: Playing on the Edge.

Conlon has recorded extensively for the EMI, Erato, Capriccio and Sony Classical labels. He made his first recording for Telarc of the world premiere of Franz Liszt's St. Stanislaus oratorio, released in January 2004. A champion of the works of Alexander Zemlinsky, he has made nine recordings of the composer's operas and orchestral works with the Gürzenich Orchestra-Cologne Philharmonic for EMI. Several of these recordings individually have earned prestigious international awards, and in October 2002, the series was awarded the 2002 ECHO Classic Award for "Editorial Achievement of the Year." Mr. Conlon has also inaugurated a new series of 20th century works with Capriccio, including a CD of works by Erwin Schulhoff with the Bayerischer Rundfunk, and a CD/DVD of the works of Viktor Ullmann with the Gürzenich Orchestra, which won the Preis der deutschen Schallplattenkritik (German Record Critics Award for Excellence). His other Capriccio recordings include the works of Karl Amadeus Hartmann and Dmitri Shostakovich with violinist Vladimir Spivakov and the Cologne Philharmonic. His most recent recording is a CD of works by Bohislav Martinu with the Bayerischer Rundfunk on Capriccio.

PBS aired a series of six shows hosted by Mr. Conlon entitled "Encore" during the spring of 2006, part of an ongoing series of documentaries on his work with the finalists of the Van Cliburn International Piano Competition, which have also included "Playing on the Edge" and "Hearing Ear to Ear with James Conlon." Among his other recent television appearances on PBS are, "Concerto," six half-hour shows hosted by Mr. Conlon, and "Cincinnati May Festival 2000.

Conlon has also conducted the orchestra for Kenneth Branagh's The Magic Flute (2006), a film version in English of Mozart's opera, reset during World War I, but otherwise very faithful to the original plot. The film has been released in Europe, but, as of April 2010, not in the United States, nor has it been shown on American television.

Conlon married Jennifer Ringo, a soprano and vocal coach, on January 9, 1987, at St. Patrick's Cathedral in New York. She is a graduate of the Juilliard School of Music and the University of Iowa. They have two daughters, Luisa, who was named for the Verdi opera Luisa Miller, and Emma. Luisa acted in the 1998 Merchant-Ivory film, A Soldier's Daughter Never Cries.

This article uses material from the article James Conlon from the free encyclopedia Wikipedia and it is licensed under the GNU Free Documentation License.