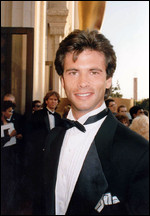 Lorenzo Lamas (born January 20, 1958) is an American actor. Lamas is known for playing Lance Cumson on the popular 1980s soap opera Falcon Crest, Reno Raines on the 1990s crime drama Renegade, and Hector Ramirez on the daytime soap opera The Bold and The Beautiful. Lamas appeared in reality television, serving as a judge on ABC television's short-lived Are You Hot? and presently starring in his own reality show, Leave it to Lamas, a series about his real-life family.

Lamas was born in Santa Monica, California, the son of Argentine actor Fernando Lamas and Norwegian-American actress Arlene Dahl. He is the stepson of swimming film star Esther Williams, who married his father when Lorenzo was 11 years old. Williams was also the best friend of Jane Wyman, who would later play along Lamas on Falcon Crest.[1] Lamas was brought up in Pacific Palisades, California, and moved to New York City in 1971, when he was 13 years old. He graduated from the Admiral Farragut Academy in Pine Beach, New Jersey, in 1975.

Longing to be an actor since the age of five, Lamas first studied acting in Tony Barr's Film Actors Workshop and quickly thereafter obtained his first TV acting role in 1976. He had a supporting role in the 1978 film Grease. Early in his career, he also had guest-starring parts in Switch, Sword of Justice, Dear Detective, Secrets of Midland Heights, Fantasy Island, The Love Boat and Hotel.

In 1980, he auditioned for and won the role of Jane Wyman's playboy grandson and henchman, Lance Cumson, for the pilot of a new series entitled The Vintage Years. The pilot was later retooled to become the hit prime time drama series Falcon Crest. During a 2006 TV interview with a Norwegian television team, Lamas said that to get the role on Falcon Crest, he had auditioned twice and beat out five other guys for the part. During his stint on Falcon Crest, Lamas was nominated for two Soap Opera Digest Awards and a Golden Globe Award. Lamas was the only actor to appear in all 227 episodes of the series. In an interview, Lamas said of Jane Wyman's persona into a hard-working legend, not a diva, who referred to her as a friendly woman on Falcon Crest: "With Jane, she expected you to know your lines, but she played poker with the crew at lunch. She was just a great gal; and I think that set the tone for the rest of us. She wasn't a 'spoiled diva,' and believe me, if anybody had a right to be a 'spoiled diva,' it was Jane because she has done so much, Oscar Award-winner, I mean, incredible actress, and she was just like clockwork, right there on time, always knew her lines, always ready to rehearse and she had this great affable quality. You just never talked about Ronald Reagan, that's all, that was one thing we never did, everything else was opened."[2] At the beginning of the ninth and final season of Falcon Crest, off-camera, Lamas received some devastating news about his TV grandmother when she was sent to the hospital that he paid visit to see her to offer her some words of comfort.[1] After cancellation, he did not keep in touch with her for years, on September 10, 2007, he lost his TV grandmother and decades-long friend. Prior to Wyman's death, Lamas released a statement: "Next to my parents, Jane was the most influential person in my young career," he added, "She has left an incredible body of work and accomplishments that cannot go without being recognized and celebrated. I will miss her greatly."[3]

In 1984, Lamas was nominated for Worst Actor at the Golden Raspberry Awards for his performance in the film Body Rock. Lamas also performed a song on the soundtrack for this film, and the track "Fools Like Me" became his only single to date to crack the Billboard Hot 100 chart.

In 1992, Lamas played the role of the falsely accused cop Reno Raines in the syndicated series Renegade. The series was seen in over 100 countries, and during its final season, it moved from first-run syndication to the USA Network. The show ended in 1997 after a run of five seasons.

From February 2004 until February 2007 Lamas played the role of Hector Ramirez on the CBS daytime soap opera The Bold and the Beautiful.

In August 2007, Lamas starred as the King of Siam in The King and I at the Ogunquit Playhouse in Ogunquit, Maine. That fall, he performed at Kean University Premiere Stages in Union, New Jersey, in the title role in Steven Dietz's Dracula. Lamas performed as El Gallo in The Fantasticks at the Casa Mañana Theatre in Fort Worth, Texas, in June 2008. In June 2009, Lamas returned to the Ogunquit Playhouse as Zach in A Chorus Line.

Lamas began appearing in the Zaxby's restaurant chain television advertisements in May 2008.

In 2009, he starred in the Asylum's Mega Shark Versus Giant Octopus as Alan Baxter, a government agent who wants to destroy both the Mega Shark and the Giant Octopus to protect the world from their destructive fights.

Lamas briefly starred as himself in Leave it to Lamas, a reality show that focused on his own real-life family on E!. It ran from October to November 2009.

In 2010, he starred as the voice of "Meap" in Disney Channel's Phineas and Ferb.

He appeared in a picture in "Phineas and Ferb the Movie" and was mentioned by Dr. Doofenshmirtz (the antagonist of the show).

When Lamas moved to New York at 13 years old, he suffered from weight problems. In 1979, he took up taekwondo and karate and started to exercise. He has won countless black belts and showed his skills in the series Renegade.

Lamas has been married five times and is the father of six children by three different women.

Lamas fathered daughter Paton Lee (born 1988) with actress Daphne Ashbrook. He was engaged to Playmate of the Month Barbara Moore, but the marriage was called off.

His third marriage was to Kathleen Kinmont (daughter of his Falcon Crest co-star Abby Dalton) in 1989; they divorced in 1993.

After just five months of dating, Lamas got married for the fifth time to Shawna Craigwho is younger than his eldest daughterin Cabo San Lucas, Mexico, on April 30, 2011. His 25 year old daughter Shayne Lamas attended her father's wedding.[5][6] He has told reporters that he will go publicly as Lorenzo Lamas-Craig. His manager, Don Gibble tells E! News, "He's always thinking outside the box so he decided to become the first celebrity to take his wife's last name." The other reason was because his last wife, former Playboy Playmate Shauna Sand, kept the Lamas name and is legally Shauna Lamas. "His new wife didn't want to be called Shawna Lamas for obvious reasons," explains Gibble.[7]

This article uses material from the article Lorenzo Lamas from the free encyclopedia Wikipedia and it is licensed under the GNU Free Documentation License.