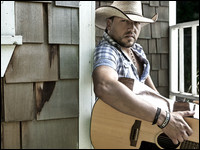 Jason Aldine Williams[2] (born February 28, 1977),[3][4] known professionally as Jason Aldean, is an American country music singer. Since 2005, Jason Aldean has been signed to Broken Bow Records, a record label for which he has released seven albums and 24 singles. His 2010 album My Kinda Party is certified quadruple-platinum by the Recording Industry Association of America (RIAA). His 2012 album Night Train is certified double-platinum, while his 2005 self-titled debut, 2007 album Relentless, 2009 album Wide Open, 2014 album Old Boots, New Dirt are all certified single-platinum.

Of his singles, 19 have reached number one on either the Hot Country Songs or Country Airplay charts with "Why", "She's Country", "Big Green Tractor", "The Truth", "Don't You Wanna Stay" (a duet with Kelly Clarkson), "Dirt Road Anthem", "Fly Over States", "Take a Little Ride", "The Only Way I Know" (a collaboration with Luke Bryan and Eric Church), "Night Train", "When She Says Baby", "Burnin' It Down", "Just Gettin' Started", "Tonight Looks Good on You", "Lights Come On", "A Little More Summertime", and "Any Ol' Barstool". Eight more of his singles have reached the top 10.

Aldean was born in Macon, Georgia, United States.[2][4] His parents separated when he was three. He was raised by his mother, in Macon, while during the summer, he would spend time with his father in Homestead, Florida.[4] Aldean changed his name on the suggestion of Monte C. Willis a music consultant hired by Barry Williams (now partners in managing Curb Recording artist Rachel Holder). "There was an artist named Jason D. Williams performing all over Nashville at the time and I felt like there would be a lot of confusion, so I called Barry and suggested the name change. Really, not an easy thing to suggest to a father, but ultimately it worked out well". Monte Willis . : In order to stand out, he changed the spelling of his middle name, Aldine, to come up with the name Aldean.[5]

After high school, with his father's help, Aldean and his band performed at Truman State University (previously Northeast Missouri State University) in Kirksville, Missouri. With Justin Weaver (one of the band's members), Aldean began writing and recording songs with Savannah based writer Robert Willis, he also recorded a song written by hit songwriter Keith Follose. You can hear those songs on Youtube. In 1998, he performed songs from his first album at a showcase staged by Atlanta nightclub The Buckboard. He was approached by Michael Knox, then of the Warner-Chappell song-publishing company.[4] After signing with Warner-Chappell, Aldean moved to Nashville on November 1, 1998, at age 21.

Aldean was offered a recording contract but was subsequently dropped. He signed with another label but again was dropped in 2000 for postponing his recording sessions repeatedly. Various showcases failed to bring him a contract. The last straw was an attempt at the Wildhorse Saloon where the promised label talent scouts never even showed up. Finally, Lawrence Mathis spotted Aldean at one of the showcases at The Wildhorse Saloon in Nashville. He signed as Aldean's first manager. Still frustrated and discouraged with his struggling career, Aldean gave himself 6 months before planning to leave Nashville and return home to Georgia. Then 5 weeks later, he was offered a deal from Broken Bow Records in Nashville. Shortly after the release of his self-titled debut album, Aldean picked up his new (and current) agent Kevin Neal. Furthermore, while recording Relentless, Aldean moved to Clarence Spalding and Spalding Entertainment for management.

Aldean's debut single, "Hicktown", was released in early 2005.[4] It served as the lead-off to his self-titled debut album and reached a peak of No. 10 on the Billboard Hot Country Songs charts.[6] The album also produced his first Number One hit in "Why",[6] This album finally released the No. 4 hit "Amarillo Sky",[6] which had previously been a non-charting single in 2002 for McBride & the Ride. This song earned a 2006 ACM nomination for Song of the Year and Video of the Year. Aldean earned the title "Top New Male Vocalist" at the 2006 ACM Awards. The album has sold over 1,000,000 copies in the United States and was certified platinum by the RIAA in 2007.

Aldean spent most of January 2007, in the studio with producer Michael Knox to finish his second album, Relentless.[4] This album was released on May 29, 2007 and at Wal-Mart locations, it was released with a Limited Edition CMT Pick DVD that included Aldean's performances. The album's lead-off single, "Johnny Cash", was originally recorded by Tracy Byrd, but Aldean's version of it peaked at No. 6.[6] Its followup "Laughed Until We Cried" became his 5th consecutive Top 10 hit.[6] Relentless has also been certified platinum by the RIAA, and its title track was released as its 3rd single. The song has also been Aldean's lowest charting single both in the U.S. and Canada,[6] failing to reach the Top 10 on the country charts.[6]

Aldean performed with Bryan Adams on an episode of CMT Crossroads in the beginning of May, and the episode premiered on June 26, 2009.[7] In an interview with Shave Magazine, Aldean explained that working with Bryan on Crossroads "was great" and that "[h]e was a lot of fun." But the real highlight for him was that he was working with Randy Owen. "I am a big fan of Alabama so I got a chance to work with Randy Owen on this album (it didn't make the album but it eventually made a bonus track). It was really cool. Alabama were like 'The Beatles' for me so working with him was definitely one of the highlights," he said "I mean, both of those guys were really cool moments, but if I had to pick one highlight, it would be working with Randy [Owen] this year."[8]

In August 2010, Aldean released a new single "My Kinda Party," which entered the Hot Country Songs chart at No. 41.[6] It is the lead-off single from his album of the same name, which was released on November 2, 2010.[10] It marks as Aldean's tenth top 10 country hit.[6] Aldean also collaborated with Kelly Clarkson on the intimate duet "Don't You Wanna Stay". His and Clarkson's performance on November 10, 2010, at the CMA Awards received positive recognition, and debuted at No. 59 on Billboard's Hot Country Songs chart[6] from unsolicited airplay for the week of November 20, 2010. In March 2011, it became Aldean's 5th number one hit.[6]

In early 2011, Aldean's version of "Dirt Road Anthem", which was recorded previously by both of its writers country rap artist Colt Ford and Brantley Gilbert (who also wrote "My Kinda Party"), debuted on the Hot Country Songs chart at No. 57 as an album cut [6] from an unsolicited airplay for the week of February 5, 2011.[11] In March 2011, the song was chosen as the 3rd single from My Kinda Party. Aldean also collaborated with Ludacris for the song at the 2011 CMT Music Awards in Nashville, Tennessee on June 8, 2011. In addition to making #1 on the Hot Country Songs chart[6] for the week of July 30, 2011, it also became Aldean's first Top 10 hit on the Hot 100 chart.

Aldean performed "My Kinda Party" at the start of the 2011 Home Run Derby, which was aired on ESPN.

Aldean won the CMA award for Album of the Year in 2011 as well as the Musical Event of the Year with "Don't You Wanna Stay", his duet with Kelly Clarkson. This made it was his first win.

On October 25, 2011, it was announced that Aldean would be performing on The Grammy Nominations Concert Live! – Countdown to Music's Biggest Night, the 1-hour special which took place live on Wednesday, November 30, 2011, at the Nokia Theatre in Los Angeles.[12] "Don't You Wanna Stay" received a Grammy nomination for Best Country Duo/Group Performance, but however lost to The Civil Wars at the 54th Grammy Awards on February 12, 2012.

The fourth single from the album was "Tattoos on This Town", which peaked at No.2,[6] followed by yet another number one single, entitled "Fly Over States".[6]

The 1st single from Aldean's 5th album was entitled "Take a Little Ride." It was released on July 16, 2012. Later, the album's title was announced as Night Train. This album was released on October 16, 2012. Its 2nd single, "The Only Way I Know," is a collaboration among him, Luke Bryan, and Eric Church. The album's 3rd single, entitled "1994," is a tribute to Joe Diffie. The album's 4th single, the title track, was released to country radio on June 24, 2013. The fifth single, "When She Says Baby", was released to country radio on November 18 of that same year. "Take a Little Ride", "The Only Way I Know", "Night Train", and "When She Says Baby" all peaked at number 1 on the Country Airplay chart respectively.[13]

During a radio interview on May 18, Aldean hinted at another possible collaboration with Ludacris. He did state that it would not be on Night Train. On December 16, 2014, Ludacris released an Extended Play titled Burning Bridges, in which the title track featured him and Aldean as a duet.[14]

Aldean performed "My Kinda Party" during the People's Choice Awards on January 9, 2013.

On July 22, 2014, Aldean released a new single "Burnin' It Down". This song would serve as the lead single off his 6th studio album Old Boots, New Dirt, which was released on October 7, 2014. This song reached #1 both on the Hot Country Songs and Country Airplay charts.[6] The album's second single, "Just Gettin' Started", was released to country radio on November 10, 2014. It reached #1 on the Country Airplay chart in March 2015. "Tonight Looks Good on You" was released as the third single on March 23, 2015. It reached #1 on the Country Airplay chart in July 2015. also performed CMT Crossroads with Bob Seger song called "Turn the Page". The album's fourth single, "Gonna Know We Were Here" released to country radio on August 17, 2015. It reached #2 on the Country Airplay chart in January 2016. Jason Aldean is one of only three artists to achieve RIAA platinum sales certification on an album released this year. His Old Boots, New Dirt album, which debuted at the top of Billboard's all-genre Top 200 chart in October, has now shipped more than one million units. This means that he is[16] the only country star to release a platinum-seller in 2014, and joins only Taylor Swift and Ariana Grande in platinum album certifications for collections released this year.[16]

At the conclusion of Aldean's Burn it Down Tour, Aldean donated over $600,000 to Susan G. Komen of South Florida.[17]

At the 2016 ACM Awards, Aldean was awarded Entertainer of the Year for the first time in his career.

Aldean married Jessica Ann Ussery on August 4, 2001.[3] Together the couple have two daughters, Keely (born Feb. 14, 2003) and Kendyl (born August 20, 2007).[3] On September 30, 2012, Aldean admitted to having "acted inappropriately at a bar",[20] while former American Idol contestant Brittany Kerr, responding to reports linking her and Aldean, said in a statement she had suffered "a lapse in judgment" and "would like to sincerely apologize to everyone that has been affected by this".[21] Aldean filed for divorce on April 26, 2013, citing irreconcilable differences and listing the filing date as the formal separation date.[3]

Aldean is a Georgia Bulldogs fan and spends every Saturday he can watching games. He played the first-ever concert at the University of Georgia's Sanford Stadium for over 60,000 fans in April 2013, and Ludacris happened to make an appearance for their collaboration of "Dirt Road Anthem." Aldean has a bulldog named Athens, for the location of the university and also has a "Man Barn" at his home, which includes televisions, a full bar, leather couches, and Georgia Bulldogs decorations which is under renovation.[28]

This article uses material from the article Jason Aldean from the free encyclopedia Wikipedia and it is licensed under the GNU Free Documentation License.