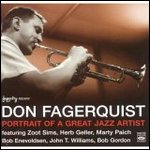 Despite high demand for his services as a lyrical soloist, he only recorded twice as a leader: a half-date for Capitol in 1955 (reissued as part of the Dave Pell Octet CD I Had the Craziest Dream) and a complete project for Mode in 1957 (Music to Fill a Void).

In 1956, Fagerquist signed on as a staff musician for Paramount Films, while still periodically recording with artists such as Shelly Manne, Mel Tormé, and Art Pepper.[2] Throughout the early- to mid-1960s, Fagerquist's solos could be heard on the recordings of Pete Rugolo, Frank Comstock, Nelson Riddle, Billy May, Paul Weston, Si Zentner, Dean Martin and many others.

By 1966, health issues forced Fagerquist to withdraw from studio recording altogether. He died from kidney disease at his home in Canoga Park, California, at the age of 46.[3]

This article uses material from the article Don Fagerquist from the free encyclopedia Wikipedia and it is licensed under the GNU Free Documentation License.