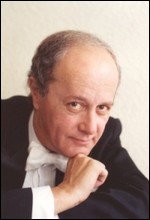 Mark Borisovich Gorenstein (Russian: born 16 September 1946) is a Russian conductor. He grew up in Odessa and studied at the conservatory in Kishinev. He later played violin in the Bolshoi Theatre Orchestra and the State Academic Symphony Orchestra of the then USSR.

Gorenstein studied conducting in the Novosibirsk conservatory. He was principal conductor of the MÁV Symphony Orchestra in Budapest, the Busan City Symphony Orchestra, and the Molodaya Rossia Orchestra (ru: « »). He received a People's Artist of Russia award in 2002 and the Order of Merit for the Fatherland in 2006.

Gorenstein became music director of the State Academic Symphony Orchestra of the Russian Federation in 2002. In 2011, controversy arose after Gorenstein made disparaging remarks about cellist Narek Hakhnazaryan at the Tchaikovsky International Competition in June 2011,[1] which led to his removal as conductor for the competition. The orchestra then demanded Gorenstein's dismissal from the orchestra, with accusations of abusive behaviour.[2] Gorenstein was subsequently dismissed from the orchestra in September 2011.

This article uses material from the article Mark Gorenstein from the free encyclopedia Wikipedia and it is licensed under the GNU Free Documentation License.

Felice Alessandro Radicati Allegretto non tanto aus dem Streichquartett B-Dur op. 16 Nr. 1
Update Required To play the media you will need to either update your browser to a recent version or update your Flash plugin.