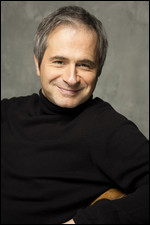 Anderszewski was born in Warsaw, Poland. He studied piano at the Chopin Academy in Warsaw (renamed Fryderyk Chopin University of Music in 2008) and conservatories in Strasbourg (with Hélène Boschi) and Lyon.[1] At age eighteen, he spent a year in the University of Southern California Thornton School of Music in Los Angeles on a scholarship. Later in his twenties, he also studied with Murray Perahia, Fou Ts'ong and Leon Fleisher.[2]

Anderszewski first came to public attention at the Leeds Piano Competition in 1990, when he walked off stage in the semi-finals because he didn't feel he was playing well enough (the piece was the op. 27 of Anton Webern).[3] He made his London debut six months later at the Wigmore Hall.

He has given recitals at the Royal Festival Hall, Carnegie Hall, Suntory Hall, the Herkulessaal in Munich, the Konzerthaus, Vienna, the Concertgebouw, the Auditorio Nacional de Música in Madrid, the Mariinsky Concert Hall in St. Petersburg and the Walt Disney Concert Hall in Los Angeles. Orchestras with whom Anderszewski has performed include the London Symphony Orchestra, the Berlin Philharmonic, the Philadelphia Orchestra, the Philharmonia Orchestra, the Royal Concertgebouw Orchestra and the Chicago Symphony Orchestra. In addition, Anderszewski has established a significant reputation for directing from the keyboard and has collaborated with chamber orchestras including the Sinfonia Varsovia, the Mahler Chamber Orchestra, the Camerata Salzburg, the Deutsche Kammerphilharmonie in Bremen and the Scottish Chamber Orchestra.

Anderszewski's chamber collaborations so far have been primarily with violinists - as well as his sister Dorota Anderszewska (currently leader of the Orchestre national de Montpellier Languedoc-Roussillon), he has performed with Viktoria Mullova, Augustin Dumay, Gidon Kremer, Frank Peter Zimmermann and Henning Kraggerud. He also appears regularly with the Belcea Quartet.

Anderszewski made a number of recordings for Harmonia Mundi, Accord and Philips before signing exclusively to Virgin Classics in 2000. His first disc on the Virgin label was Beethoven's Diabelli Variations, which received a number of prizes including a Choc du Monde de la Musique and an Echo Klassik award. His discography also includes a Grammy-nominated CD of Bach's Partitas 1, 3 and 6 and a disc of works by Chopin. His affinity with the music of his compatriot Karol Szymanowski is captured in recording of the composer's solo piano works, which received the Classic FM Gramophone Award in 2006 for best instrumental disc. On 12 April 2012 he received the BBC Music Magazine Recording of the Year Award at a ceremony in London, for his Virgin Classics CD of music of Robert Schumann.

Anderszewski has collaborated on a number of occasions with the filmmaker Bruno Monsaingeon. The first of these collaborations, Piotr Anderszewski plays the Diabelli Variations (2001) explores Anderszewski's particular relationship with Beethoven's opus 120, whilst the second, Piotr Anderszewski, Unquiet Traveller (2008) is an unconventional artist portrait, capturing Anderszewski's reflections on music, performance and his Polish-Hungarian roots. A third film by Monsaingeon, Anderszewski Plays Schumann was completed in 2010. There have also been two filmed recordings of Anderszewski's concert appearances, featuring Mozart piano concertos and a recital given at Warsaw's Philharmonic Hall in 2007.

Anderszewski has received a number of awards throughout his career, including the Gilmore Artist Award (2002), given every four years to a pianist of exceptional talent. He has also been a recipient of the Szymanowski Prize (1999)[4] and the Royal Philharmonic Society's Best Instrumentalist award (2001).[5]

Anderszewski has championed the work of his compatriot Szymanowski through numerous performances and has directed festivals dedicated to his music at the Théâtre des Bouffes du Nord in Paris (2005), Carnegie Hall, New York (2010), the Wigmore Hall in London (2005 and 2010) and the Philharmonic Hall in Łódź (2010).

This article uses material from the article Piotr Anderszewski from the free encyclopedia Wikipedia and it is licensed under the GNU Free Documentation License.