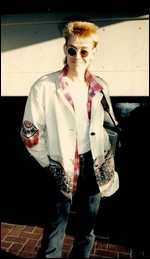 Philip Gabriel Gould, also known as Phil Gould (born 28 February 1957) is a British drummer, song writer, and singer from the Isle of Wight in southern England. With singer Mark King, he founded the band, Level 42.

Gould was born in Hong Kong, and studied percussion at the Royal Academy of Music in London, where he met keyboardist Mike Lindup. Gould's first foray into the charts came with pop group M, drumming on their single 'Pop Muzik', a number one single in the United States, and No. 2 in the UK. Gould also appeared on Top Of The Pops with Roxy Music for their performance of "More Than This" and also in their promo video for this Roxy Music hit.

Together with Mike Lindup, Mark King and Gould's guitarist brother Boon, he formed Level 42 and had several major hits, writing many of the lyrics and co-writing many songs. Their biggest selling albums were World Machine and Running in the Family. In 1987, the Gould brothers left Level 42, Phil citing nervous exhaustion and being unhappy with their new pop sound. Gould became a respected session musician. The single "It's Over" was a fitting end to the siblings' stay in the band.

Gould briefly returned as studio drummer and principal lyricist on 1994's Forever Now album. However, dismayed at what he felt was the record company's ineptitude, he did not go on the road with the band for their Forever Now tour. Having apparently played only one promotional gig, Gould was quickly replaced as live drummer by Gavin Harrison.

King and Lindup have continued with Level 42. They released a new album in September 2006, titled Retroglide.

In 2007, Gould contributed to the launch of a young and talented Italian composer and singer named Diana Winter, playing in her debut album Ezcapism.

During 2008 new music was expected to be available: with contributions from various artists including Mike Lindup and Wally Badarou. In January 2009, Gould finally released the album Terraforming under the group name of Gould, Brown and Black. The album was initially made available via iTunes with a view to a CD release later in the year.

With Gould, Brown and Black

This article uses material from the article Phil Gould (musician) from the free encyclopedia Wikipedia and it is licensed under the GNU Free Documentation License.