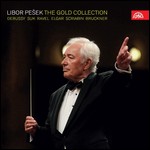 Pešek was born in Prague and studied conducting, piano, cello and trombone at the Academy of Musical Arts there, with Václav Smetáček and Karel Ančerl among his teachers. He worked at the Pilsen and Prague Operas, and from 1958 to 1964 was the founder and director of Prague Chamber Harmony. He was chief conductor of the Slovak Philharmonic in 1981–82, and from 1982 to 1990 was conductor-in-residence of the Czech Philharmonic. He is the current chief conductor of the Czech National Symphony Orchestra.[1]

In the UK, Pešek was music director of the Royal Liverpool Philharmonic Orchestra (RLPO) from 1987 to 1998, and now holds the title of conductor laureate. His work with the RLPO included leading the premiere of Anthony Powers' Horn Concerto (Michael Thompson, soloist).[2] He has also conducted the Brno Philharmonic Orchestra.

Pešek is best known for his interpretations of Czech music. He has been a champion of lesser known Czech composers, particularly Josef Suk and Vítězslav Novák. His recordings include music of Pavel Josef Vejvanovský.[3]

This article uses material from the article Libor Pešek from the free encyclopedia Wikipedia and it is licensed under the GNU Free Documentation License.