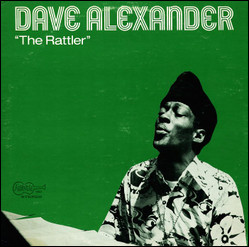 Born in Shreveport, Louisiana, in 1938, Alexander grew up in Marshall, Texas. His father was a pianist and his mother encouraged him to play in the church. Alexander joined the United States Navy in 1955, moved to Oakland, California, in 1957, and began a long history of working with various San Francisco Bay Area musicians. A self-taught pianist, he played with Big Mama Thornton, Jimmy Witherspoon, Muddy Waters, Buddy Guy and Albert Collins. Later in 1968, he recorded his first songs for the World Pacific label release called Oakland Blues, a compilation album of artists from that city. He also performed at the Ann Arbor Blues and Jazz Festival in 1970, and played at the San Francisco Blues Festival, many times from 1973 onward. He was also the warm up act at the Last Waltz at Winterland, Thanksgiving 1974. He also performed in Europe.

Alexander recorded a pair of albums The Rattler (1972) and The Dirt on the Ground (1973), for the Arhoolie label under his given name Dave Alexander.[2] Songs include "The Hoodoo Man (The Voodoo Woman & The Witch Doctor)", "St. James Infirmary", "Blue Tumbleweed", "Sundown", "Sufferin' With The Lowdown Blues", "Strange Woman", "Cold Feelin", "Jimmy, Is That You?", "So You Wanna Be A Man" and "The Dirt On The Ground".[3]

In 1976, he began to perform as Omar the Magnificent having changed his name to Omar Khayam.[4]

In 1993 small blues label Have Mercy! released Black Widow Spider, followed it up with hit Baddass in 1995, and Anatomy of a Woman in 1998.

In the 2000s Alexander lived and performed mostly in the Sacramento area, where he recorded on Have Mercy! Records. He was an articulate writer and advocate for the blues and African American music.[6] He wrote several articles for the Living Blues magazine.[7]

On Martin Luther King Day 2011, NPR Radio All Things Considered broadcast a segment about Marshall, Texas being the birthplace of the boogie-woogie style of piano. The broadcast described how Dr. John Tennison, a San Antonio-based boogie-woogie musicologist, had shared his knowledge of the history of boogie-woogie with the citizens of Marshall, and how Tennison had located Alexander in Sacramento, California. Alexander performed in Marshall during December 2010, to great acclaim.[8] In February 2011, Alexander relocated to Marshall, Texas, where he lived until his death.

On January 8, 2012, Alexander was found dead of an apparently self-inflicted gunshot wound at his home in Marshall, Texas. He was 73 years old.[9][10]

This article uses material from the article Dave Alexander (blues musician) from the free encyclopedia Wikipedia and it is licensed under the GNU Free Documentation License.