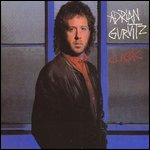 Gurvitz (until the early 1970s he used the surname Curtis and then took the family real name, Gurvitz) is mostly known as the lead guitarist/singer with the band, The Gun. The Gun's only UK Singles Chart success was "Race With The Devil".[2] A song that was revived in the early 80s by a cover version from female hard rock band, Girlschool.

Although billed as a "psychedelic/crossover" band, "Race With The Devil" saw The Gun succeed with an experiment based on a mixture of orchestration and hard rock.

Gurvitz was also the lead guitarist in the band Three Man Army, (together with his brother Paul Gurvitz). Their album, Third Of A Lifetime (1971), predominantly featured a selection of hard-driven blues tracks such as "Butter Queen", but also featured the melodic instrumental title track. The album is now available on a remastered CD format. Adrian Gurvitz also recorded on a 1973 album with Buddy Miles.

After Three Man Army split, the Gurvitz brothers teamed up with Ginger Baker to form The Baker Gurvitz Army. They released the albums Baker Gurvitz Army (1974), Elysian Encounter (1975) and Hearts on Fire (1976), on which they added vocalist Snips from the band Sharks. After this they joined with Graeme Edge for two albums for Threshold - Kick Off Your Muddy Boots (1975) and Paradise Ballroom (1977). Both albums were illustrated by Joe Petagno.

Gurvitz is the stepfather of Carly Lewis, a former member of the American pop girl group, No Secrets. Gurvitz wrote the song "Hot" that was featured on their debut album. He is currently working with recording artist, Emii, towards releasing her debut album.[3]

This article uses material from the article Adrian Gurvitz from the free encyclopedia Wikipedia and it is licensed under the GNU Free Documentation License.