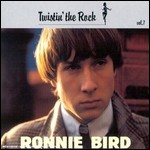 As a student, Bird attended Lycée Claude Bernard until he had an argument with a teacher. He debuted his recording career in 1964 with Decca, with the title track Adieu à un ami, which was a homage to Buddy Holly. Despite his evident ability and the apparent success of songs like Elle m'attend, Où va-t-elle ?, he ended his artistic career after 5 years.

He is also noted for participating in the French production of the musical Hair between 1968 and 1972 . Moreover, he wrote the lyrics of the song, Precious Things, sung by Dee Dee Bridgewater, in a duet with Ray Charles, which saw success in 1989.

The song Le Pivert (the woodpecker) was prohibited from being played on Radio-France because of, according to an internal memo, its "vulgar attack on good taste". The memo was published in Charlie Hebdo.

This article uses material from the article Ronnie Bird from the free encyclopedia Wikipedia and it is licensed under the GNU Free Documentation License.