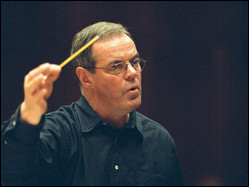 Marcus Creed is an English conductor.

Born in Eastbourne, Sussex (South England), he was educated at King's College, Cambridge, Christ Church, Oxford, and Guildhall School in London. He moved to Germany in 1976 and worked firstly as a coach and chorusmaster at the Deutsche Oper Berlin. From 1987 to 2001 he was artistic director of the RIAS Kammerchor[1] and worked with the Berlin Scharoun Ensemble as a pianist and conductor and conducted the Berlin Staatskapelle and Symphonie-Orchester Berlin as well as the Akademie für Alte Musik Berlin. In 2001, he was appointed artistic director of the SWR Vokalensemble Stuttgart[2] in 2003. Since 1998, he is also Professor for choral conducting at the Hochschule für Musik Köln.

This article uses material from the article Marcus Creed from the free encyclopedia Wikipedia and it is licensed under the GNU Free Documentation License.

Christoph Ernst Friedrich Weyse Andante aus der Sinfonie Nr. 5 Es-Dur
Update Required To play the media you will need to either update your browser to a recent version or update your Flash plugin.