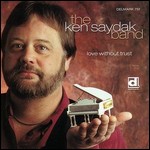 Ken Saydak (born Chicago, Illinois, United States)[1] is an American Chicago blues pianist and singer-songwriter. In a long career, Saydak has played as a sideman to Lonnie Brooks, Mighty Joe Young, Johnny Winter and Dave Specter.[2] Saydak has released three albums under his own name since 1999. Billboard once described him as "...a gripping frontman".[3]

During the 1980s, Saydak played on tours and albums by Johnny Winter, including Winter's Grammy Award nominated LP, Guitar Slinger.[1] Following this spell, Saydak became one of the members of the blues rock band, Big Shoulders, who issued two albums (produced by Saydak) before disbanding.

His debut solo album was 1999's Foolish Man released on Delmark Records.[2] Saydak has also produced his own albums, as well as Zora Young's 2000 issue, Learned My Lesson. He has now appeared on over fifty albums.

The Chicago Sun Times reported "Ken Saydak has built an impressive body of work with his three solo albums and his studio work...It's My Soul is his best stand-alone project yet".[3]

This article uses material from the article Ken Saydak from the free encyclopedia Wikipedia and it is licensed under the GNU Free Documentation License.