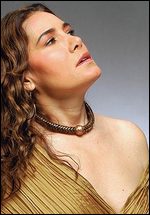 Tania Libertad de Souza Zúñiga (born 24 October 1952), better known as Tania Libertad, is a Peruvian singer[1] who has lived in Mexico since 1978.[2] She is considered one of the best singers in the World music genre, and one of the most popular artists of Latin America. Tania has been named an Ambassador for Peace by UNESCO, Comendadora by the Peruvian government, a member of the Order of Rio Branco by the Brazilian government, among many other recognitions to her legacy in the music world.[3][4] In 2009, she received the Latin Grammy Lifetime Achievement Award for musical excellence to honor her brilliant career.[5] With more than 38 albums and sales of over 40 million copies, her work has been hailed throughout the Americas, Europe and Africa. [6] She has performed successful concerts in France, Italy, Spain, Portugal, Belgium, Germany, Switzerland, Holland, England, Morocco, Angola, Senegal, the United States, Peru, Ecuador, Puerto Rico, Venezuela, the Dominican Republic, Honduras, Uruguay, Colombia, Costa Rica, Guatemala, Panama, El Salvador, Argentina, Brazil and Mexico. [7] In early 2012, she began celebrating 50 years as a performer with two sold-out performances at the Palacio de Bellas Artes-Mexico City's most prestigious concert hall-and began an extensive tour throughout Latin America.[8]

The emotion her singing elicits is summarized by a beautiful quote from Nobel Prize-winning Portuguese author Jose Saramago:

"The first time I heard Tania Libertad sing, it was a revelation from on high - from a place where only a naked voice might go, alone in the world, unaccompanied by any instrument. Tania was singing the Rafael Alberti composition "La Paloma" a capella, and each note touched a string in my soul until I was completely dazzled." - José Saramago [9]

Libertad was born in the small town of Zaña, Lambayeque Region on the coast of northern Peru and was raised in the regional capital of Chiclayo.[2] Her mother was a nurse of indigenous descent, and her father was a policeman of Portuguese descent with very traditional views on gender roles. She grew up with eight older brothers.[11] She found growing up in such a male-dominated environment difficult.[12]

She first sang on stage at the age of five in Chiclayo. Because her parents worked long hours, her family didn't know she was singing. In early performances, she sang traditional Peruvian and Mexican songs, including waltzes and boleros.[13] When her father discovered her musical talent, he had her sing songs he had written to his mistresses; she found these songs were of poor quality and helped her distinguish between good and bad music.[12] She further developed her repertoire with traditional and rock music on the radio, and recalls singing in competitions at age seven, knowing 300 boleros by eight, and making records by nine.[13]

As a teenager, Libertad moved to the Peruvian capital of Lima. She sang in nightclubs there, and her father worked as her manager. She was soon offered a contract with RCA Victor and had her first national hit in Peru, "La Contamanina."[2] While Libertad pursued her musical career she convinced her father to let her study engineering in the university. Because her father wanted to study what one of her brothers did, she studied science and engineering in fisheries. She never used this education later in life, but she credits her university experience with exposing her to other people who were interested in art and left-wing politics, especially anti-war movements.[13]

During this time, Libertad's interest in Afro-Peruvian music, which flourished in her native north, grew. The nationalist Peruvian government wanted to encourage expressions of Peruvian culture, going so far as to establish an Afro-Peruvian ballet company. She also became uncomfortable singing in nightclubs due to the sexism and racism prevalent there, which motivated her to begin singing socially conscious music in universities and union halls.[2] But as her father became more protective of her as a teenager, he wanted her to give up her musical career,[11] so at the age of 20, she ran away from home and lived with friends for two weeks until her father accepted her desire to sing full-time.[13]

In 1976, Libertad began to travel abroad, and was inspired by the musical traditions and political consciousness she encountered in the places she visited, such as Cuba.[13] Unsuccessful in Peru with her new brand of music, she decided to emigrate to Mexico. She arrived there penniless and bonded with Latin American artists who fled their home countries for political reasons. Soon, she found her first job at the Blanquita Theatre in Mexico City.[12] There, Libertad was given a contract by PolyGram singing trova, Afro-Peruvian music, salsa, and bolero.[2] In 1985, she released her first album of boleros. She has lived in Mexico since, and has sung in over 20 countries on every inhabited continent.

Despite not being of African descent, Libertad is inspired by the Afro-Peruvian music indigenous to the area of Peru in which she was born, an area primarily populated by descendents of African slaves.[2][13] Her albums Costa Negra and Color Negro, from 2003 and 2004 respectively, are recordings of Afro-Peruvian songs.[2]

Libertad is married to a businessman and has a son; they live in Mexico City.[12]

She considers herself a citizen of the world, and ascribes to the ideas of Simón Bolívar, especially that Latin America should be a unified body without borders.[14] She identifies as anti-war, but does not like to be labeled a protest singer.[15]

Libertad has recorded 38 albums with more than 40 million copies sold.[16]

This article uses material from the article Tania Libertad from the free encyclopedia Wikipedia and it is licensed under the GNU Free Documentation License.