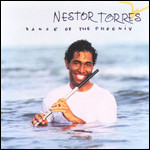 Nestor Torres is a jazz flautist who was born in Mayaguez, Puerto Rico in 1957. He took flute lessons at age 12 and began formal studies at the Escuela Libre de Música, eventually attending Puerto Ricos Inter-American University. At 18, he moved to New York with his family. Torres went on to study both jazz and classical music at the Mannes College of Music in New York and the New England Conservatory of Music in Boston, among other places.

He moved to Miami in 1981, and signed with PolyGram, where he released Morning Ride in 1989. His major label debut climbed quickly to the top of the Billboard Contemporary Jazz charts and soon brought him widespread acclaim. Tragedy struck a year later when an accident in a celebrity boat race left him with eighteen fractured ribs, two broken clavicles and a collapsed lung. His record company dropped him, he and his wife divorced, and his home was nearly repossessed.

Nestor Torres is also a longtime practitioner of Nichiren Buddhism of the Soka Gakkai International.

In 2007, Nestor played at the World Music Concert during One World Week 2007, in front of a full house, at the University of Warwick.

On March 21, 2009 he played in Herbst Theatre in San Francisco in performance "Tango Meets Jazz" with Pablo Ziegler.

On September 9, 2009 he played at the Greek Theatre (Los Angeles) with the Dave Matthews Band. He guested on the song "Lying In The Hands Of God." He performed at the 2010 Central American and Caribbean Games opening ceremony.

This article uses material from the article Nestor Torres from the free encyclopedia Wikipedia and it is licensed under the GNU Free Documentation License.