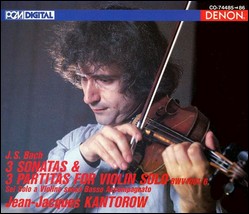 Kantorow was born in Cannes, France. From the age of 13 he studied at the Paris Conservatoire with René Benedetti, and in 1960 won the first violin prize. In the 1960s he won ten major international prizes, including first prizes in the Carl Flesch Competition (London), the (Genoa) Paganini Competition, and the Geneva International Competition. Since the 1970s he has been noted for his solo performances in a very wide range of repertoire (from Baroque music to contemporary), and as a chamber music performer. His recordings have won many awards, including the Grand Prix du Disque and the Grand Prix de l’Académie Franz Liszt. He held senior positions at the Strasbourg and Rotterdam conservatories and at the Conservatoire de Paris, until his retirement from conservatoire violin pedagogy. He continues to teach privately and to give master-classes.

According to Grove Music Online, 'Kantorow has an infallible technique and a beauty of tone which combines the best features of the French and Russian schools.'[1] He plays a Stradivarius attributed violin, the ‘ex-Leopold Auer’, dated 1699.[2]

This article uses material from the article Jean-Jacques Kantorow from the free encyclopedia Wikipedia and it is licensed under the GNU Free Documentation License.

Gaetano Donizetti Sonate C-Dur für Flöte und Klavier
Update Required To play the media you will need to either update your browser to a recent version or update your Flash plugin.