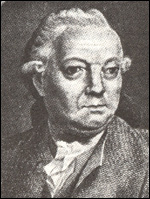 Born in Staré Benátky, Bohemia, Benda was 19 when Frederick II of Prussia bestowed upon him in 1741 the position of second violinist in the chapel of Berlin. The following year Benda was summoned to Potsdam as a composer and arranger for his older brother Franz, himself an illustrious composer and violinist. Seven years later, in 1749 he entered the service of the Duke of Gotha as chapel master, where he constantly cultivated his talents for composition, specializing in religious music.

A stipend from the Duke allowed him to take a study trip to Italy.

Benda had particular success with a form of musical stage entertainment, the melodrama, which influenced Mozart. The melodrama Ariadne auf Naxos is generally considered his best work. At its debut in 1775, the opera received enthusiastic reviews in Germany and afterwards, in the whole of Europe, with music critics calling attention to its originality, sweetness and ingenious execution. Besides that he wrote many instrumental pieces including a few sonatinas.

Georg Benda died in Köstritz, Gotha at the age of 73, leaving his son, Friedrich Ludwig Benda (1752–1796), who briefly carried on the family musical tradition, serving as a music director in Hamburg and later in Mecklenburg, before finally becoming the Concertmaster in Königsberg. He died less than a year after his father.

This article uses material from the article Georg Benda from the free encyclopedia Wikipedia and it is licensed under the GNU Free Documentation License.