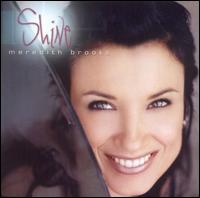 Meredith Ann Brooks (born June 12, 1958) is an American singer-songwriter and guitarist best known for her 1997 hit song "Bitch", for which she was nominated for a Grammy Award.

Success with Blurring the Edges and "Bitch"

By 1995 Brooks landed a major label contract with Capitol Records. After three years her first single was finally released, "Bitch", and based on the success of the song she garnered nominations for the 1998 Grammy Awards for Best Female Rock Vocal Performance and Best Rock Song. The single went platinum in Australia.[1]

Her album Blurring the Edges achieved platinum sales and peaked at 22 on the Billboard 200 and 5 on the UK Albums Chart. The album was produced by David Ricketts, formerly of David and David (with David Baerwald), and he also played keyboards (among other instruments) on the album. Brooks toured in the US and Europe in 1997 and 1998 to support the album, and also participated in the Lilith Fair music festival tour in both of those years.

On March 30, 1998, in Argentina, she opened for the Rolling Stones. During her set the crowd demanded the Stones and became violent, throwing objects including rocks and tampons at the stage and bruising her eye. She appeared again the next day wearing an Argentine soccer shirt, but the crowd again threw things at her, so after singing "Bitch" she threw the shirt on the ground and walked off.[2] [3]

In 1999 Brooks recorded her second album, Deconstruction. The track "Sin City" was recorded for the movie Snake Eyes.

In 2002, Brooks signed with independent label Gold Circle Records.[4] She worked on her third album, Bad Bad One. The label folded immediately after releasing the album. The single "Shine" charted at #35.[5]

In 2002, she produced Jennifer Love Hewitt's album BareNaked and appeared on VH1 Divas Las Vegas as a guest guitar soloist with Celine Dion and Anastacia.

Brooks signed a record deal with SLG Records and re-issued Bad Bad One as Shine in 2004. The track "Shine" was used as the theme music for Dr. Phil from 2004-08. The instrumental remix appears as the last track on the album.[6]

In 2007 Brooks completed a new children's album titled If I Could Be... and is developing Portland area Sony Music Entertainment artist Becca.

Brooks is a member of the Canadian charity Artists Against Racism. [7]

This article uses material from the article Meredith Brooks from the free encyclopedia Wikipedia and it is licensed under the GNU Free Documentation License.