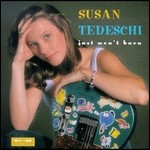 Susan Tedeschi ( /tdski/; born November 9, 1970) is an American blues and soul musician who has received multiple Grammy Award nominations[1] and is well known for her singing voice, guitar playing, and stage presence. She is a member of the Tedeschi Trucks Band (originally known as "Soul Stew Revival"), which is a conglomeration of her band, her husband's The Derek Trucks Band, and other musicians.

Susan Tedeschi was born on November 9, 1970, in Boston, Massachusetts, to a family of Italian ancestry (Tedeschi means Germans in Italian) and was raised in Norwell, Massachusetts. She is the daughter of Dick Tedeschi, granddaughter of Nick Tedeschi and great-granddaughter of Angelo Tedeschi, founder of the New England-based supermarket and convenience store chain.[3] Tedeschi has always been musically inclined and made her debut public performance as a six-year old understudy in a Broadway musical. Also, she sang for family members and listened to her father's record collection of old vinyl recordings, like Mississippi John Hurt and Lightning Hopkins. Raised as a Catholic, she found little inspiration in the church choir and attended predominantly African-American Baptist churches, feeling the music was "less repressed and more like a celebration of God." She has played in bands since the age of 13. At the age of 18 she formed her first all-original group The Smokin' Section in the nearby town of Scituate, Massachusetts.[4]

After graduating Norwell High School, Tedeschi attended the Berklee College of Music where she sang in a Gospel choir. She performed show tunes on the Spirit of Boston and received her Bachelor of Music degree in musical composition and performance at age 20.[1] During that time she began sitting in on blues jams at local venues and immersed herself in the Boston music scene.

Tedeschi formed the Susan Tedeschi Band in 1993[1] featuring Tom Hambridge and Adrienne Hayes. In 1995 her then boyfriend, Boston musician Tim Gearan taught Tedeschi how to play blues guitar. It was then she really began to hone her skills on the instrument. In December the band released Better Days to regional audiences. Record contracts were difficult to keep together; however, recording sessions from 1997 were acquired by Richard Rosenblatt and the band was signed to indy label Tone-Cool Records and Just Won't Burn, featuring young guitarist Sean Costello, was released in February 1998 to very positive reviews, particularly from blues critics and publications. Susan was the first artist to play the very first Sunset Sessions in March 1998 at the Marriott in the US Virgin Islands. [5]

In 1999, Tedeschi played several dates in the all-woman traveling festival Lilith Fair organized by Sarah McLachlan.[4] Throughout 1998 and 1999 she toured extensively throughout the United States and drew larger crowds.

She opened for The Rolling Stones in 2003 and played in huge venues, gaining national exposure. Somewhat surprisingly, the gig wasn't financially lucrative. According to Tedeschi, "They pay, but it's not great. I don't make any money 'cause I've got to pay all my sidemen. I'll be lucky if I break even."[6]

In 2001, she married Allman Brothers Band slide guitarist Derek Trucks, who is bandleader and lead guitarist of The Derek Trucks Band. Tedeschi and Trucks met in New Orleans when she was the opening act on the Allman Brothers Band's 1999 Summer Tour. They have two children; Charles Khalil Trucks, born in March 2001, is named for saxophonist Charlie Parker, guitarist Charlie Christian, and author Khalil Gibran. Sophia Naima Trucks, born in 2004, takes her unusual middle name from the John Coltrane ballad, which was also the jazz legend's first wife's name. They reside in Jacksonville, Florida.[9]

Tedeschi, with her powerful vocals and Trucks on guitar complement one another, and have toured together frequently under the name "Soul Stew Revival". This includes the members of The Derek Trucks Band, the members of Susan Tedeschi's band, and other musicians who travelled with them, including Trucks' younger brother, drummer Duane Trucks. In 2008, they added a three-piece horn section.

In 2010, both Susan Tedeschi and her husband Derek Trucks announced a hiatus for their solo bands, and formed a new group called Tedeschi Trucks Band. The group performed at a number of festivals including Eric Clapton's Crossroads Guitar Festival, Fuji Rock Festival and others. Unlike their previous collaborative project - Derek Trucks & Susan Tedeschi's Soul Stew Revival - the Tedeschi Trucks Band focuses on writing and performing original material, and is the focus of both Trucks and Tedeschi for the foreseeable future.[10]

This article uses material from the article Susan Tedeschi from the free encyclopedia Wikipedia and it is licensed under the GNU Free Documentation License.