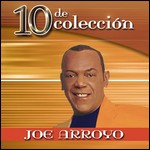 Álvaro José Arroyo González (also known as Joe Arroyo or El Joe; 1 November 1955 26 July 2011) was a Colombian salsa and tropical music singer, composer and songwriter. Considered one of the greatest performers of Caribbean music in his country.

Joe Arroyo was born in Cartagena. Born and raised in the neighborhood Nariño in Cartagena, Arroyo began his career at an early age, at the age of eight when he sang in brothels in Tesco, a red-light zone in his hometown. In the beginning he sang with groups like "Los Caporales del Magdalena", "Manuel Villanueva y su Orquesta", "La Protesta" and "Super Combo Los Diamantes", in 1971 he recorded with "La Promiscua".

In 1971 Arroyo had his biggest opportunity of becoming a nationally known artist. He was discovered by Julio Ernesto Estrada, the bass player and director of the band Fruko y sus Tesos and signed up with Colombian record label Discos Fuentes.[1] He performed with the band for ten years until 1981 when he began his solo career leading his band, named "La Verdad" (The truth).

Joe Arroyo became very successful by mixing salsa, cumbia, porro, soca, kompa, zouk and other music from the African Diaspora in a unique style. Some of his most famous songs are Rebelión","La noche" "Tania", "El Ausente" and "En Barranquilla me Quedo.

Joe Arroyo was forced to stay away from his performances many times due to his health problems. On more than one occasion, he was thought to be dead because of his abrupt absences from media attention. Joe Arroyo had to go through surgery because of problems with his eyes.

He was once seriously ill for about 3 months due to a problem with his thyroid even though many had attributed it to drug abuse, which the singer denied in Rolling Stone magazine, Argentina in January 2004.

Between June and December 2011 the RCN channel broadcasted a soap opera based on the singer's life called The Joe "The Legend".

Arroyo died in Barranquilla on July 26, 2011, after spending nearly a month in hospital due to multiorgan failure. During his stay in the hospital his health deteriorated. The day before his death, doctors announced the singer was suffering from several organ failures including renal and heart failure and he was given his final sacrament by the local bishop. The singer died at 7:45 local time.[2]

This article uses material from the article Joe Arroyo from the free encyclopedia Wikipedia and it is licensed under the GNU Free Documentation License.