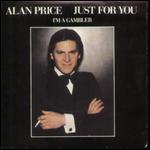 Alan Price (born 19 April 1942) is an English musician, best known as the original keyboardist for the British band the Animals and for his subsequent solo work.[1]

Price was born in Fatfield, Washington, County Durham, and was educated at Jarrow Grammar School, County Durham. He is a self-taught musician and was a founding member of the Tyneside group "The Alan Price Rhythm and Blues Combo", which was later renamed the Animals. His organ-playing on songs by the Animals, such as "The House of the Rising Sun", "Don't Let Me Be Misunderstood" and "Bring It On Home to Me" was a key element in the group's success.[1]

After leaving the Animals, Price went on to have success on his own with his own band the Alan Price Set and later with Georgie Fame. He introduced the songs of Randy Newman to a wider audience. Later, he appeared on his own television show as well as achieving success with film scores, including winning critical acclaim for his musical contribution to the 1973 film O Lucky Man! as well as writing the score to the stage musical Andy Capp. Price has also acted in films and television productions.[1][2][3]

Price formed the Animals in 1962 and left the band in 1965 to form the Alan Price Set, with the line-up of Price, Clive Burrows (baritone saxophone), Steve Gregory (tenor saxophone), John Walters (trumpet), Peter Kirtley (guitar), Rod "Boots" Slade (bass) and "Little" Roy Mills (drums). In the same year, he appeared in the film Dont Look Back, which was filmed featuring Bob Dylan on tour in the UK.[2]

Price went on to host shows such as the musical Price To Play in the late 1960s, which featured Price performing and introducing the music of guests such as Fleetwood Mac and Jimi Hendrix. His second album, A Price on His Head (1967), featured seven songs by Randy Newman, who was virtually unknown at that time. In August 1967, he appeared with the Animals at the hippy love-in that was held in the grounds of Woburn Abbey.

A later association with Georgie Fame resulted in "Rosetta", which became a Top 20 hit (1971), reaching No. 11 in the UK Singles Chart.[4] An album followed, Fame and Price, Price and Fame Together. During this period Price and Fame secured a regular slot on The Two Ronnies show produced by BBC Television, and also appeared on the Morecambe and Wise Show.[2] He recorded the autobiographical album Between Today and Yesterday (1974) from which the single "Jarrow Song" was taken, returning Price to the UK singles chart at number 6.[4]

Price participated in three reunions of the Animals between 1968 and 1984. In July 1983, the Animals started their last world tour. Price's solo performance of "O Lucky Man" was included in their set. In 1984, they broke up for the final time and the album Rip It To Shreds – Greatest Hits Live was released, comprising recordings from their concert at Wembley Stadium in London.

Price recorded two albums with the Electric Blues Company featuring guitarist and vocalist Bobby Tench and keyboardist Zoot Money, the first Covers was recorded in 1994. A Gigster's Life for Me followed in 1996 and was recorded as part of Sanctuary's Blues Masters Series, at Olympic Studios in South-West London.[5]

Since 1996 Price has continued to perform regularly, arrange, write songs and create other works. During the 2000s he has continued to tour the UK with his own band and others including the Manfreds, Maggie Bell[6] and Bobby Tench.[7]

Price appears as himself in the acclaimed D.A. Pennebaker documentary Don't Look Back and is in several scenes with Bob Dylan and his entourage, including one where his departure from The Animals is mentioned.

Price has been closely involved with the work of film director Lindsay Anderson. In 1973, he wrote the music for Anderson's film O Lucky Man!, which he performs on screen in the film and appears as himself in one part of the storyline. In 1987, he wrote the score to Anderson's final film, The Whales of August.

He acted in Alfie Darling, a sequel to the film Alfie, during the course of which he became romantically involved with his co-star, Jill Townsend. He also composed and sang the theme tune to the 1982 film adaptation of The Plague Dogs, "Time and Tide".[2]

In 1981, he composed the score for the musical Andy Capp, based on the eponymous comic strip. Price also wrote the lyrics, together with the actor Trevor Peacock. The play transferred from the Royal Exchange Theatre, Manchester to London's Aldwych Theatre in September 1982.[8] Price later provided the theme to Thames Television's 1988 sitcom adaptation of Andy Capp in the form of a rewritten "Jarrow Song". Other TV theme work includes a re-recorded version of his 1974 single "Papers", which was used as the theme tune to the successful LWT situation comedy Hot Metal.[9]

In 1992, Anderson included a touching episode in his autobiographical BBC film Is That All There Is?, with a boat trip down the River Thames to scatter Rachel Roberts' and Jill Bennett's ashes on the waters while Price accompanied himself and sang the song "Is That All There Is?"

Price is believed to have two children and has been married twice. His first marriage was to Maureen Elizabeth Donneky. The couple divorced. Price and Donneky had one daughter, Elizabeth.[10]

In 1990 Price married his current wife Alison Thomas and they also had a daughter.[11]

In 1992 Price lived in London with his wife and daughters.[12] In 2010 Price dedicated his November Bulls Head show to his first wife Maureen Price, following her funeral.

This article uses material from the article Alan Price from the free encyclopedia Wikipedia and it is licensed under the GNU Free Documentation License.