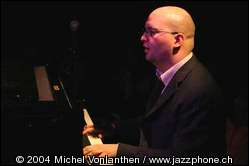 Ethan Iverson (born February 11, 1973 in Menomonie, Wisconsin)[1] is a pianist, composer, and critic best known for his work in the postmodern jazz trio The Bad Plus,[2] with bassist Reid Anderson and drummer Dave King.

Prior to the forming of The Bad Plus, Iverson was the musical director for the Mark Morris Dance Group and a student of both Fred Hersch and Sophia Rosoff. He has worked with artists such as Billy Hart, Kurt Rosenwinkel, Tim Berne, Mark Turner, Ben Street, Lee Konitz, Albert "Tootie" Heath, Paul Motian, Larry Grenadier and Charlie Haden.

Iverson writes about jazz and other subjects at length at his blog, Do The Math.

With The Bad Plus

With the Billy Hart quartet (including Mark Turner and Ben Street)

With Reid Anderson and Billy Hart

With Ben Street and Albert Heath

With Reid Anderson and Jorge Rossy

This article uses material from the article Ethan Iverson from the free encyclopedia Wikipedia and it is licensed under the GNU Free Documentation License.

Johann Wilhelm Wilms Sinfonie Nr. 5 D-Dur op. 52
Update Required To play the media you will need to either update your browser to a recent version or update your Flash plugin.