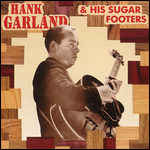 Born in Cowpens, South Carolina,[1] Garland began playing the guitar at the age of 6. He appeared on local radio shows at 12 and was discovered at 14 at a South Carolina record store.[2] He moved to Nashville at age 16, staying in Ma Upchurch's boarding house, where he roomed with upright bassist Bob Moore and fiddler Dale Potter.

At age 19, Garland recorded his million-selling hit "Sugarfoot Rag", although some attribute the song to Bernie B. Smith, Jr., published two years earlier by M.M. Cole/BMI as "Bernie's Reel". An instrumental version was the opening theme for ABC-TV's Ozark Jubilee from 1955-1960. Garland appeared on the Jubilee with Grady Martin's band, and on Eddy Arnold's network and syndicated television shows.

He also played with jazz artists such as George Shearing and Charlie Parker in New York and went on to record Jazz Winds From a New Direction, showcasing his evolving talent,[3] along with Gary Burton on vibraphone, Joe Benjamin on acoustic bass and Joe Morello on drums. It is believed that Garland was the first to explore the use of the power chord in popular music.

At the request of Gibson Guitar company president, Ted McCarty, Garland and fellow guitarist Billy Byrd strongly influenced the design of the Byrdland guitar, which derived from the Gibson L-5 guitar Garland is seen holding in the photograph.[4]

In September 1961, he was playing for the soundtrack of Presley's movie, Follow That Dream when a car accident left Garland in a coma that lasted for a week. With the help of his wife, he re-learned how to walk, talk, and play the guitar though he never recovered sufficiently to return to the studios. It was believed electroconvulsive therapy, prescribed by his doctors, may have caused more damage to his brain, but little evidence exists to support this theory. Garland's brother, Billy, claimed the crash was actually an attempted murder by someone in the Nashville music scene,[5] but there is no evidence of that. Garland was widely respected by his peers and Nashville producers such as Chet Atkins, Don Law and Owen Bradley.

When noted Nashville journalist Peter Cooper asked Chet Atkins a number of years ago who he thought the best guitar player to ever come to Nashville was, Atkins stated without hesitation, "Hank Garland." "Chet wasn't wrong," said Harold Bradley, an A-Teamer who, after the accident, took over for Garland as the most recorded guitarist in Nashville. "I am very humble about my playing because Hank Garland is the standard."

"I can't even imagine what he would have become had he not been in that accident, said Brad Paisley, a guitarist and contemporary country hit-maker who received a Grammy nomination for his own version of "Sugarfoot Rag." "You're talking about 40 years of lost innovation that could have come only from him."

Garland died on December 27, 2004 of a staph infection in Orange Park, Florida, where he lived with his brother, Robert Garland, and sister-in-law, Amy Garland. Upon his passing, The New York Times described Hank as "a studio artist known for musical riffs that could take a recording from humdrum to dazzling."

Hank was survived by two daughters, Cheryl Gruendemann and Debra Garland along with four grandsons and great grandchildren. 'The epitaph on Hank's gravestone reads, "THE GREATEST GUITAR PLAYER THAT EVER WALKED PLANET EARTH."

This article uses material from the article Hank Garland from the free encyclopedia Wikipedia and it is licensed under the GNU Free Documentation License.