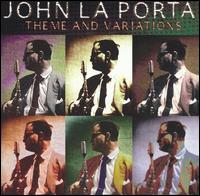 John LaPorta (13 April 1920 12 May 2004)[1] was a Philadelphia-born jazz clarinetist and saxophonist. LaPorta's sound has been compared to that of fellow jazz experimenter Jimmy Giuffre. He is usually considered a member of the "cool" school in jazz and his improvisations identify him as a well-schooled, thoughtful player.

LaPorta began studying clarinet at the age of nine and studied methods at the Mastbaum School in Philadelphia, where one of his classmates was fellow clarinettist Buddy DeFranco. He also studied classically with Joseph Gigliotti of the Philadelphia Orchestra, and, later, Leon Russianoff at the Manhattan School of Music.

LaPorta also developed his sense of jazz from such prominent figures as Count Basie, Duke Ellington, Lester Young and Herschel Evans. He picked up both alto and tenor saxophone. As a teenager he played with Philadelphia bands alongside such players as Charlie Ventura and Bill Harris.

In the early 1940s he joined the Bob Chester Band, then later joined Woody Herman's First Herd (second alto). Following this, LaPorta settled in New York and began to study with Lennie Tristano.[2]

He taught at the Parkway Music School, then at public schools on Long Island, followed by Manhattan School of Music, and, ultimately, at Berklee College of Music in Boston.[2] Along with guitarist Jack Petersen, LaPorta helped fashion the Berklee curriculum. Specifically, the pair pioneered the use of Greek modes for teaching chord-scales, a technique which has become the standard for teaching music theory worldwide.

In the 1990s John and his wife, Virginia, retired in Sarasota, Florida, where he wrote his autobiography, Playing It By Ear (ISBN 1-881993-38-8). In retirement, LaPorta performed with the Sarasota Jazz Club, and as guest artist with the Fred Williams Trio.

LaPorta died from complications of a stroke on May 12, 2004, in Sarasota.

This article uses material from the article John LaPorta from the free encyclopedia Wikipedia and it is licensed under the GNU Free Documentation License.

Antonio Vivaldi Gloria D-Dur
Update Required To play the media you will need to either update your browser to a recent version or update your Flash plugin.