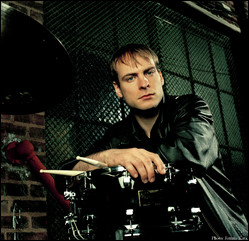 Hoenig was born in Philadelphia to a vocalist father and violinist mother. He was exposed to classical and other music at an early age. He played both piano and violin, then rock and metal drums as a teen before settling into jazz. He attended Pennsylvania Governor's School for the Arts in summer 1990. He attended the University of North Texas College of Music in 1992 for three years and was a member of the highly regarded One O'Clock Lab Band. In 1995 he transferred to William Paterson College in New Jersey and moved to New York a year later.

In 2000 Ari self-produced his first solo drum album, Time Travels (2000) and his second The Life Of A Day 2002, on which he explores the melodic possibilities of the drum set. The Ari Hoenig Quartet was formed at the end of 2002 and featured Jacques Schwarz-Bart on tenor sax, Jean-Michel Pilc on piano, and Matt Penman on bass. They released two records on the Smalls Records label: The Painter (2004) and the DVD Kinetic Hues (2005). In 2006 Ari signed a multi record deal with Dreyfus Records and released his first record for them called Inversations (2006) which features the trio of Jean Michel Pilc and Johannes Weidenmueller. Bert's Playground (2008), Ari's second record for Dreyfus, features Ari's Punk Bop Band joined by Chris Potter. Ari chose his Punk Bop Band to make the live record Punk Bop Live at Smalls that was released on the Smalls Live label in 2010 and features Will Vinson on alto, Jonathan Kreisberg on guitar, fellow Jazz Mandolin Project alumni, Danton Boller on bass and Tigran Hamasyan as a special guest. A year later (2011) Ari's Quartet with Tigran Hamasyan, Gilad Hekselman, Orlando le Fleming and Chris Tordini released Lines of Oppression on the Naïve label. In 2016, Ari Released 'The Pauper and the Magician' on AH-HA Records with his quintet with Shai Maestro on piano, Gilad Hekselman on guitar, Tivon Pennicott on Sax and Orlando Le Fleming on bass.

Besides the quintet, Ari leads 2 other groups which play his original music, the Ari Hoenig Nonet and Trio. The Nonet performs Ari's original compositions arranged by Noam Wiesenberg and features various other players in the New York area. The trio is with Gilad Hekselman and Orlando le Flemming and has toured extensively in Europe, Japan and South America. Ari also co-leads a variety of projects including Pilc, Moutin, Hoenig ("the three headed monster"), jazz electronica project "Nasty Factorz" with Gael Horellou and various duo's with Chris Potter, Edmar Casteneda and Dan Weiss.

Ari Currently lives in Brooklyn with his wife and 2 kids.

In 2013 Ari won the prestigious BMW Welt (World) award in Munich, an international competition for best band led by a drummer. [1]

As an educator, Ari teaches privately and is on faculty at New York University and The New School for Social Research in New York. He gives clinics and lectures at music schools and universities worldwide.

The Ari Hoenig Songbook is a book with the lead sheets of all of Ari's compositions.

This article uses material from the article Ari Hoenig from the free encyclopedia Wikipedia and it is licensed under the GNU Free Documentation License.