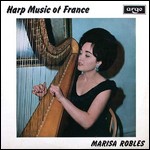 She was born in Spain, where she studied the harp with Luisa Menarguez, and studied music at the Madrid Conservatory, graduating at the age of sixteen in 1953. She made her concert debut at seventeen, performing with flautist Jean-Pierre Rampal.

The Concerto for Flute and Harp by Mozart which they performed together was to become the piece for which she is best known. She has recorded and performed it with James Galway and with her husband Christopher Hyde-Smith, among others.[2] In 1963 she premiered Sones en la Giralda on the BBC, a wedding present written for her by Joaquín Rodrigo.

This article uses material from the article Marisa Robles from the free encyclopedia Wikipedia and it is licensed under the GNU Free Documentation License.