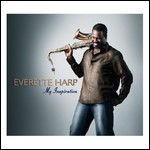 Everette Harp (born August 17, 1961, in Houston, Texas)[1][2] is an American blues, jazz and gospel saxophonist who has recorded on Blue Note and Capitol Records. Harp's 2006 album, In the Moment, debuted in the number one position of Billboards Contemporary Jazz Chart.[3]

Everette Harp started playing piano at two, and began practicing saxophone at the age of four. The youngest of the eight children of a minister, gospel music was one of Harp's earliest influences. Harp started playing jazz in high school (High School for Performing and Visual Arts, Houston), and graduated from North Texas State University with a music major in the early 1980s. While there he joined Phi Beta Sigma. Working as an accountant for a short time, Harp played in local Houston bands, most notably a local jazz/funk group called The Franchise, which released its own album locally, which included the first recording of Harp's "There's Always Hope" in 1987. Harp moved to Los Angeles in 1988. He immediately toured briefly with Teena Marie, and then internationally with Anita Baker. In 1992, Harp released his self-titled solo debut.

Soon after, Harp played at the Montreux Jazz Festival, and began weekly appearances on The Arsenio Hall Show. He continued to play & tour with notables, including Chaka Khan, George Duke, Chante Moore, Anita Baker, John Tesh, Kenny Loggins, Brenda Russell, Marcus Miller, and Dianne Reeves.[4] Harp is also known for his performances with Marcus Miller, David Sanborn and Wayne Shorter. In recent years Harp has reduced his side gigs to focus on his solo career.[5] Harp has also performed at the Omaha Blues, Jazz, & Gospel Festival held annually in North Omaha, Nebraska in August. He also performed on "Soul Train '93" (Know You Like to Dance)" with the rap group Naughty by Nature in 1993.

This article uses material from the article Everette Harp from the free encyclopedia Wikipedia and it is licensed under the GNU Free Documentation License.